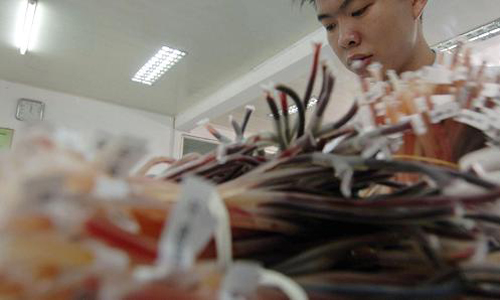 SHANGHAI (Reuters) - China's rising demand for healthcare is exposing a chronic shortage of an essential commodity: blood. With hospital blood supplies tight, desperate patients are turning to agents known as "blood heads", who sell certificates that give patients access to state blood banks, creating a black market at the heart of the healthcare system. "To us patients, buying blood solves our problems," said Hong, a retired Shanghai civil servant who suffers from myelodysplastic syndrome, a debilitating blood condition. "If there were no blood heads, what would I do?" The blood "famine", as it has been dubbed, is an unintended consequence of China's attempts to restore faith in the nation's scandal-stained blood supply and encourage people to donate. In the late 1980s and 1990s, local officials urged farmers to sell their blood and plasma, and an earlier generation of blood heads sold this to hospitals and blood banks. Tens if not hundreds of thousands contracted HIV through unhygienic practices in the process. A second scandal in 2011 further depressed donations. A young woman who claimed she worked at the Red Cross Society of China posted online pictures of her lavish lifestyle, damaging the image of a charity that helps the government collect blood. In the mid-1990s, China started shuttering commercial blood stations and in 1998 it introduced a blood donation law, banning the commercial sale of blood and encouraging voluntary donation. It also tightened rules on plasma collection and increased blood testing. Chinese law now encourages patients to present a certificate showing that they, friends or relatives have donated blood when they need to tap the national supply. Some hospitals will not provide blood without these certificates. The effect has been to penalize chronically ill patients who depend on regular or large transfusions, as well as those who cannot count on family and friends nearby. Chinese law also limits individual whole blood donations to twice a year, and provinces rarely share blood. To meet demand, a new generation of blood heads have moved in, paying people off the street to donate blood at a state blood bank and selling their donation certificates to those in need. The blood heads include men like Zhang, a 25-year-old from northeastern Jilin province who late last year stood in a neon yellow puffer jacket outside the Red Cross Center in Beijing. His terms: 1,000 yuan ($160) for every 100 cc (3.4 fl oz) he gets donated into the blood bank. All he needs - beyond money - is a day's notice, the name of the hospital and the blood type of the patient.