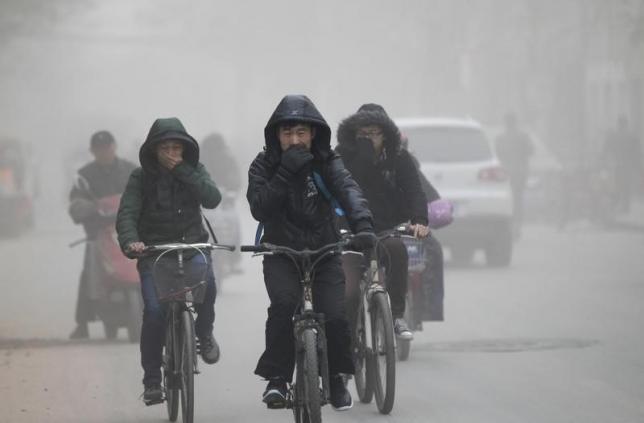 BEIJING - China's choking air pollution is moving to the country's west, environmental group Greenpeace said, though air quality may have modestly improved in eastern cities such as Beijing in recent months. Provinces in central and western China, including Henan, Hubei, Hunan and Sichuan, are now among those with the worst PM2.5 levels in the country, a measure referring to particles smaller than 2.5 micrometres in diameter that are hazardous to health, Greenpeace said on Tuesday. Facing mounting public pressure, leaders in Beijing have declared a war on pollution, vowing to abandon a decades-old growth-at-all-costs economic model that has spoiled much of China's water, skies and soil.But efforts to curb smog in China's eastern urban hubs have pushed many industrial polluters west. "Armed with this information, the government must now ensure that pollution is not simply relocated to other regions, and that the same strict measures enacted in cities like Beijing are actually enforced across the country," Zhang Kai, Climate and Energy Campaigner at Greenpeace East Asia, said in a statement on the group's website. The analysis was based on data provided by the Chinese government for the first quarter of 2015. China has sought to improve transparency and compel polluters to provide comprehensive and real-time emissions data, but doubts have arisen in the past about the accuracy of Chinese air pollution indices. China's vice minister for environmental protection in early April announced a two-year inspection campaign to root out fake air quality data and accused some local governments of manipulating the information to meet national standards. The Greenpeace analysis said Beijing still ranked in the top five worst polluted provincial-level regions in China, though the capital's PM2.5 concentration improved more than 13 percent in the first quarter of this year compared to the first quarter of 2014. Over the past seven years, PM2.5 levels in Beijing averaged nearly five times the recommended daily level set by the World Health Organization, according to data from a monitoring station at the US embassy. - Reuters