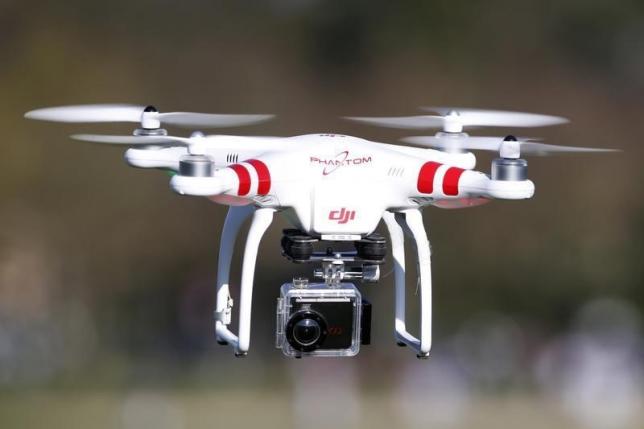 WASHINGTON - Chinese drone maker SZ DJI Technology Co Ltd has established a strong early lead in the U.S. commercial market as companies turn to its inexpensive, light-weight flying devices for a host of uses from shooting films to mapping and site inspections. Sixty-one of the 129 companies that received regulatory approval to use unmanned aircraft are using DJI drones, or 47 percent, far ahead of its nearest rival, a Reuters review of federal records as of April 9 shows. Nearly 400 other companies, more than half of the 695 businesses still awaiting approval, have applied to use DJI drones. Shenzhen-based DJI, whose best-selling Phantom 2 Vision+ drone retails for around $1,200 in the United States, estimates that it already has about 70 percent of the commercial market worldwide and a larger portion of the consumer market. Federal records also suggest that DJI is quickly expanding its U.S. market share, thanks in part to a new process speeding federal exemptions for companies that intend to use drones previously vetted by regulators. DJI accounted for about a third of the roughly 50 exemptions granted by the Federal Aviation Administration (FAA) from last September through mid-March. But it has claimed just over half of the 89 exemptions received since then. Industry experts say basic drones such as DJI's are likely to drive the U.S. commercial market for the foreseeable future, meeting business demand for uses such as aerial photography for site inspections, real estate promotions and video production. The market for more sophisticated unmanned aerial vehicles (UAVs) is being limited by FAA policy that restricts commercial drone flights to line-of-sight operations at altitudes of 500 feet (152 meters) or less. Those rules are complicating efforts by e-commerce giants Amazon.com and Google Inc to develop high-tech drones capable of delivering packages over long distances. "Those limitations effectively rule out larger UAVs, which are not going to be cost-effective with that sort of restriction," said Philip Finnegan, the Teal Group’s director of corporate analysis. "It’s really going to drive things toward the low end of the market." The Teal Group expects the U.S. market for commercial drones to reach $5.4 billion (3.62 billion pounds) in sales by 2023. Founded in 2006 by Chinese entrepreneur Frank Wang, DJI generated nearly $500 million in revenue in 2014, up from $130 million in the prior year. It expects to exceed $1 billion in sales this year and is in talks with investors to raise new capital. A person familiar with the discussions said DJI, valued at $10 billion, is also pursuing partnerships. EASE OF USE The emergence of a Chinese company as a dominant player in a new U.S. technology market has so far not raised concerns in Congress. Other Chinese technology companies including telecom equipment maker Huawei Technologies Co Ltd. have been accused by U.S. lawmakers of posing national security risks, hurting their chances of building a substantial U.S. business. DJI's U.S. business customers include American International Group Inc, Commonwealth Edison Co in addition to a host of lesser known firms in real estate, insurance, energy, agriculture and film and television. Due to safety concerns, U.S. companies are banned from using drones unless they obtain an FAA exemption. The U.S. aviation regulator proposed rules in February to lift the ban, but final regulations are not expected until late 2016 or early 2017. Since FAA began granting exemptions last September, gains have been limited for DJI’s rivals, whose products are often much more expensive. DJI's nearest competitor in the U.S. commercial market is Swiss drone-maker senseFly, owned by Paris-based Parrot, with 8.5 percent of the exempted companies, federal records show. Sensefly's eBee mapping drone package has a price tag of around $25,000. More complex systems made by European and U.S. competitors can cost upwards of $100,000. DJI has gained its market lead without a U.S.-based sales staff. Both hobbyists and business customers purchase drones through online retail outlets and directly from DJI's site, and say they stand out for their ease of use as well as the low price. “Everything just works. A lot of other systems require you to tweak all the settings and parameters," said Paul Callahan, chief executive of New York-based SouthGate Films, which won FAA approval this month to use a DJI drone for aerial photography including solar panel inspections. Some lawmakers, including Senator Charles Schumer of New York, have called on the FAA to ease flying restrictions so drones can be used for a wider array of business applications. Lawmakers have also argued that restrictions on outdoor drone testing have put U.S. companies at a disadvantage to foreign rivals, which operate in less restrictive climates overseas. Some industry executives say low-end drones like DJI's risk becoming commoditized and that the more promising market lies in high-end services such as thermal imaging and 3D mapping. DJI says it has plans to expand into more sophisticated drones. - REUTERS