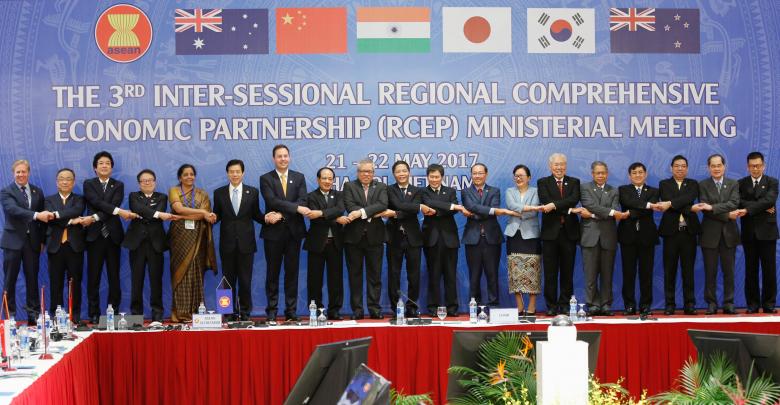 HANOI - Asian trade ministers met on Monday to discuss a proposed free trade deal that is backed by China and has been given new impetus by the US withdrawal from the Trans-Pacific Partnership Agreement.

"RCEP is the biggest trade agreement being negotiated at the moment," Vietnam's trade minister, Tran Tuan Anh, said at the opening. "RCEP will provide a unified framework which further facilities and promotes good services investment and trade vision."

Monday's meeting in Hanoi followed heated discussions there at the weekend at the first gathering of trade ministers from Asia Pacific Economic Cooperation (APEC) countries since US President Donald Trump's switch to an "America First" agenda.

APEC countries failed to come out with their usual joint statement after the United States rejected language on fighting protectionism which Asian countries wanted to include.

Members of the TPP trade deal, which does not include China, agreed on the sidelines of the meeting to pursue it despite Trump's decision to abandon the agreement in favour of bilateral arrangements with Asian countries.

The RCEP and TPP trade deals are not mutually exclusive and some countries would be members of both.

But the U.S. withdrawal has put major doubts over the future of the TPP agreement, a point reinforced in comments made by Vietnam's trade minister.

RCEP, on the other hand, benefits from the backing of China, whose regional dominance has gained greater momentum with the policy shift in the United States and its own Belt and Road initiative to extend its global influence.

China has increasingly positioned itself as a global free trade champion.

Discussions on the Beijing-backed deal began in 2012 and are due to be completed by the end of this year, although previous targets have been missed. Documents seen by Reuters on Monday proposed getting signoff from regional leaders in November.

The main focus of RCEP is reducing tariffs although not as many would be cut to zero as under the TPP agreement.

Coverage of services and the digital economy are more modest than for the other agreement and it would have no protection for labour rights or the environment.

Moreover, while it might have provisions for greater freedom of movement, this is one of the potential sticking points in discussions. -Reuters