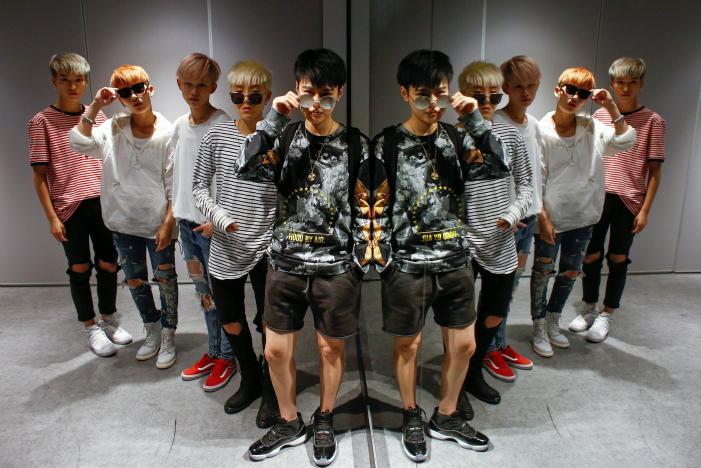 BEIJING – Just a little under a year ago, Min Junqian was an unknown art student in China's eastern province of Shandong, dreaming of becoming a star and hitting the big time.

Fast-forward a year and the 23-year-old is a member of Acrush, China's first all-girl "boy band", which released its debut single last week, but already has hundreds of thousands of fans.

"Our fathers' generation still holds the idea that girls should dress in a feminine manner, something I was never comfortable with," Min told Reuters. "I just like to dress in a unisex way."

Min wasn't expecting to be picked when she went to the band's audition last year.

But her boyish appearance and androgynous style were exactly what entertainment startup Zhejiang Huati Culture Communication, backed by Tencent Holdings, was looking for.

Marketed as a pop band that encourages girls to pursue their own identities and shake up female conventions, Acrush has won more than 749,000 followers on Chinese social networking site Weibo.

Acrush goes against the grain in China's still-evolving music industry, where girl bands are marketed as sweet young things to appeal to a male audience.

"I left home when I was young," said the band's lead singer, 21-year-old Peng Xichen. "To comfort my parents, I told them my boyish appearance would keep me safe."

Some fans, most of them millennials born after the mid-1990s, have called the band members their "husbands". Some have sent love letters, which the band cannot answer, bound by contract.

"We are not allowed to disclose our gender preferences or have romantic relationships," said Lu Keran, the band's leader.

From day one, Zhejiang Huati has created individual identities for the women.

Min is supposed to be the band's comedian, while Peng is a "gentle romantic", and the 21-year-old Lu is portrayed as an energetic dancer with a sunny disposition.

She wears long-sleeved outfits to shield from the public eye a dragon tattoo on her arm, and is reluctant to talk about it, saying only, "I did it when I was an ignorant girl."

But she did admit to sometimes dressing in pink and behaving like a little girl.

The Chinese blogosphere is ablaze with questions about Acrush's leanings. Asked if they supported feminism and lesbian, gay, bisexual and transgender issues, the band said they had no idea what the abbreviation LGBT stood for.