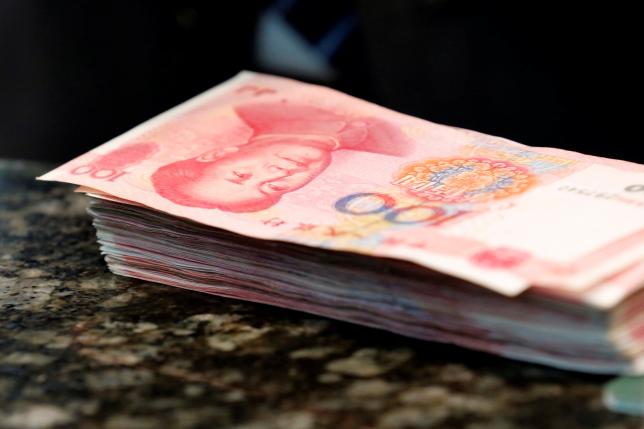 BEIJING - As China's economy notches up another quarter of steady growth, the pace of credit creation grows ever more frantic for every extra unit of production, as inefficient state firms swallow an increasing share of lending. The world's second-largest economy grew 6.7 percent in the first half of the year, unchanged from the first quarter, testament to policymakers' determination to regulate the pace of slowdown after 25 years of breakneck expansion. Analysts say that determination has come at the cost of a damngerous rise in debt, which is six times less effective at generating growth than a few years ago. "The amount of debt that China has taken in the last 5-7 years is unprecedented," said Morgan Stanley's head of emerging markets, Ruchir Sharma, at a book launch in Singapore. "No developing country in history has taken on as much debt as China has taken on on a marginal basis." While Beijing can take comfort that loose money and more deficit spending are averting a more painful slowdown, the rapidly diminishing returns from such stimulus policies, coupled with rising defaults and non-performing loans, are creating what Sharma calls "fertile (ground) for some accident to happen". From 2003 to 2008, when annual growth averaged more than 11 percent, it took just one yuan of extra credit to generate one yuan of GDP growth, according to Morgan Stanley calculations. It took two for one from 2009-2010, when Beijing embarked on a massive stimulus program to ward off the effects of the global financial crisis. The ratio had doubled again to four for one in 2015, and this year it has taken six yuan for every yuan of growth, Morgan Stanley said, twice even the level in the United States during the debt-fueled housing bubble that triggered the global crisis. Total bond debt in China is up over 50 percent in the past 18 months to 57 trillion yuan ($8.5 trillion), equal to around 80 percent of GDP, and new total social financing, the widest measure of credit provided by China's central bank, rose 10.9 percent in the first half of 2016 to 9.75 trillion yuan. "SHORT-TERMISM" China's money supply has increased in tandem with new lending, and at 149 trillion yuan is now 73 percent higher than in the United States, an economy about 60 percent larger. "China is the largest money printer in the world - they have been for some time. The balance is really extreme," says Kevin Smith, CEO of U.S.-based Crescat Capital. The reason China gets such poor returns from this pump-priming is that state firms are the main beneficiaries of extra credit, at the expense of the more efficient private sector. Some of the slowdown in private sector growth is weak confidence in the business outlook, but a lack of access to affordable financing is also a factor, the government and economists say, as banks prefer the security of state-owned borrowers. Private firms had to pay 6 percentage points more in interest for bank loans in the second quarter versus the public sector, analysts at investment bank CICC estimate. Though Beijing officially wants to rebalance the economy to the private sector and cut surplus capacity in inefficient heavy industry, that aspiration clashes with its more immediate ambition to hit its growth targets. For now it seems the latter goal is over-riding the former. Policymakers say that while corporate debt is high, the central government has room to increase its debt ratios and raise its fiscal deficit to between 4 and 5 percent to boost the economy. And analysts expect more monetary easing in the form of interest rate cuts, which will encourage more borrowing and more bad debts. "We believe that China's short-termism will only add to its long-standing problems of excess capacity and non-performing loans," Fathom Consulting analyst Laura Eaton wrote in a note following the release of first-half GDP data. Smith at Crescat Capital thinks it will lead to a twin currency and banking crisis, with a 20 percent crash in the yuan versus the dollar. “It’s a question of when, and it looks like it’s coming pretty close," he said. -Reuters