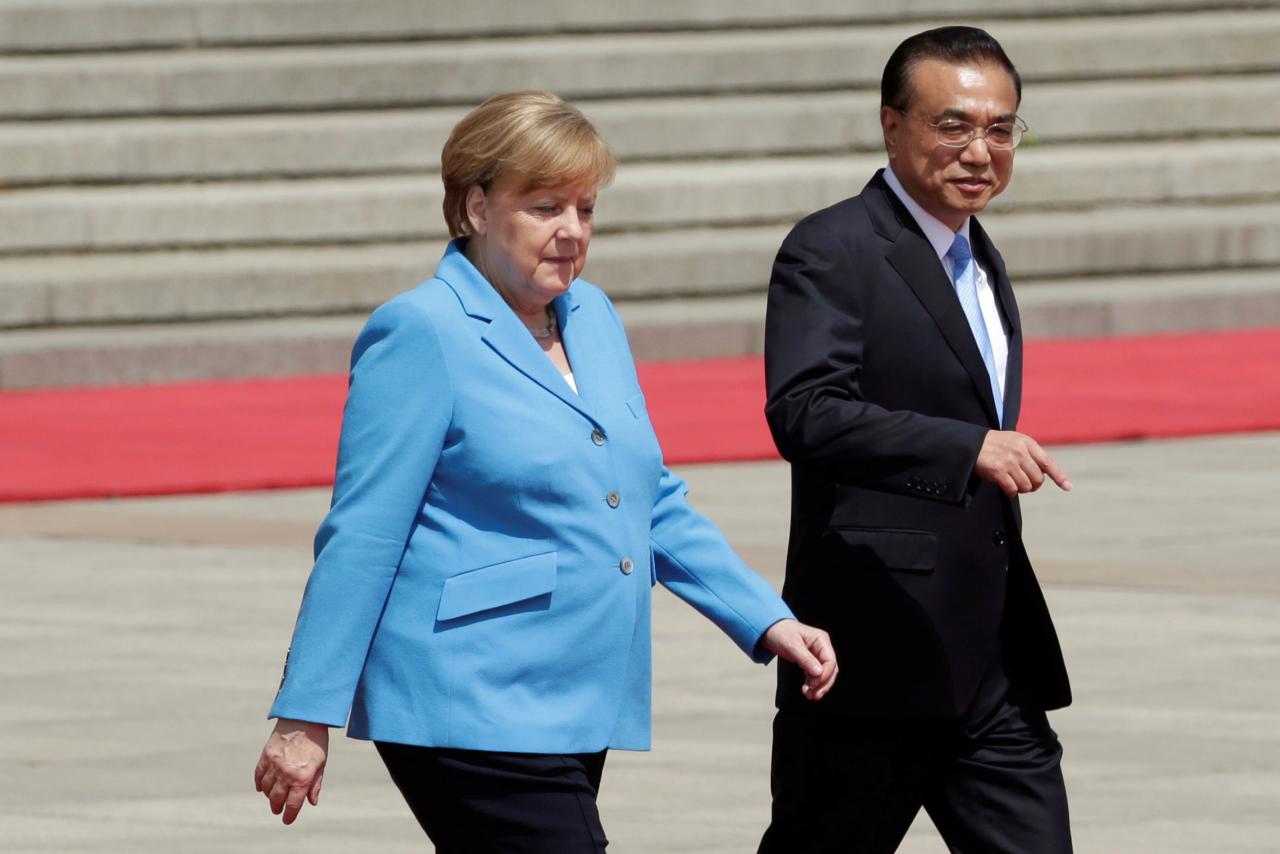 BEIJING (Reuters) - China welcomes German firms and will protect their investments, China’s Premier Li Keqiang said on Thursday after meeting visiting German Chancellor Angela Merkel, who said Germany supported Chinese investment there. Merkel faces a delicate diplomatic balancing act on her two-day China visit, which is clouded by US President Donald Trump’s trade threats and his decision to pull out of the Iran nuclear deal. Germany and China, two exporting nations that run large trade surpluses with the United States, have found themselves in Trump’s firing line and are scrambling to preserve the rules-based multilateral order on which their prosperity rests. But while Merkel’s hosts may be keen to send a message of total Chinese-German solidarity in Washington’s direction, German officials have suggested that Merkel must avoid the appearance of siding too openly with China in a confrontation with Germany’s longtime ally. Li, in a joint media appearance with Merkel at Beijing’s Great Hall of the People, said China and Germany both upheld global free trade, and stressed the huge potential for cooperation between them. Beijing will use Chinese law to protect the rights of German investors, he said. Merkel welcomed China’s recent announcements that it would further open its financial sector to foreign participation and reduce Chinese joint venture requirement in sectors such as automobiles, a mainstay of German investment in the world’s second-largest economy. In reality, Merkel’s government shares many of the Trump administration’s concerns about Chinese business practices, including what many Western countries have complained are state-backed efforts to pressure foreign companies into giving up trade secrets. But Trump’s “America First” trade policy, his administration’s professed disdain for the World Trade Organization, as well as his withdrawal from the Iran nuclear deal, have pushed China and Germany into closer alignment, German officials say. Merkel went to Washington last month to lobby Trump to stay in the Iran nuclear pact, only to see him withdraw days later and threaten sanctions against European firms that continue to respect it. The trip is Merkel’s eleventh to China since becoming chancellor in 2005. Accompanied by an industry delegation of roughly 20 German executives, she later in the day attends a dinner hosted by President Xi Jinping.