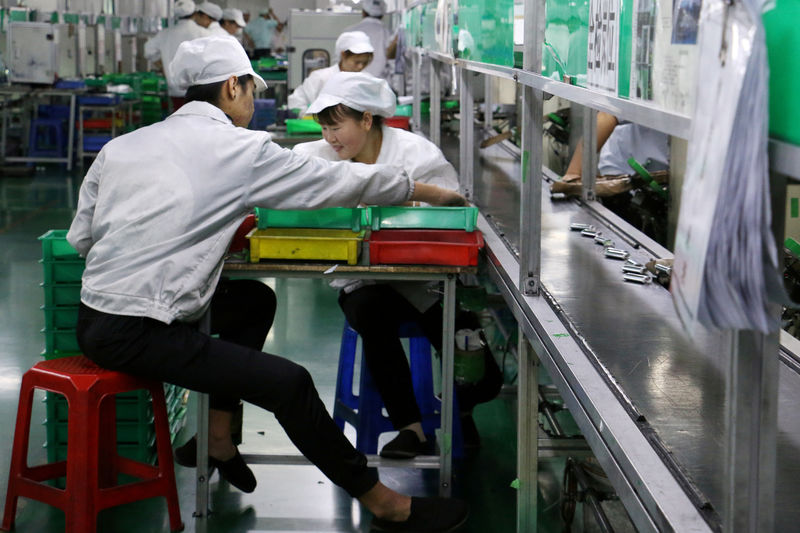 BEIJING (Reuters) - China’s November retail sales grew at the weakest pace since 2003 and industrial output rose the least in nearly three years as domestic demand softened further, underlining rising risks to the economy as China works to defuse a trade dispute with the United States.
The world’s second-largest economy has been loosing momentum in recent quarters as a multi-year government campaign to curb shadow lending put increasing financial strains on companies in a blow to production and investment. The stresses on broad activity have been compounded by a sharp escalation in China’s trade dispute with the United States, which has threatened to fracture global supply chains, chill investment, exports and growth. Retail sales rose 8.1 percent in November from a year earlier, data from the National Bureau of Statistics showed on Friday, below expectations for an 8.8 percent rise and the slowest since May 2003. In October, sales increased 8.6 percent. Industrial output rose 5.4 percent in November, missing analysts’ estimates and matching the rate of growth seen in January-February 2016. Factory output had been expected to grow 5.9 percent, unchanged from October’s pace. Over the weekend, China reported far weaker than expected November exports and imports, reflecting slower global demand and waning domestic factory activity as profit margins narrow. With economic growth at its weakest since the global financial crisis, Chinese policymakers are ramping up spending, pushing banks to increase lending and cutting taxes to shore up businesses and ward off a more damaging slump. A temporary 90-day trade war truce agreed by the United States and China early this month may have removed some of the immediate pressure on the economy. Yet even in the unlikely event the world’s top two economies reach a durable resolution in their dispute, ebbing domestic demand, mounting household debt and a cooling real estate sector point to a further slowdown in growth next year. China’s fixed-asset investment growth quickened to 5.9 percent in the January-November period. Analysts polled by Reuters had expected it to rise 5.8 percent in the first 11 months of the year, edging up marginally from 5.7 percent in January-October. Private-sector fixed-asset investment rose 8.7 percent in January-November, compared with an increase of 8.8 percent in the first 10 months. Private investment accounts for about 60 percent of overall investment in China.