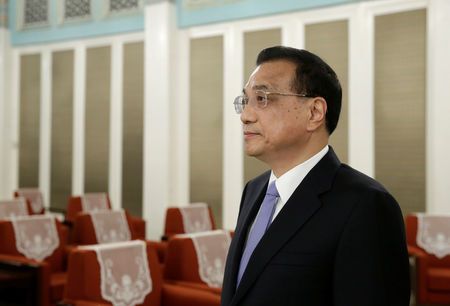 SHANGHAI (Reuters) - China’s premier said loans to small firms should not be “willfully withdrawn,” and China should help small firms tackle their liquidity difficulties, the official Xinhua news agency reported. His comments are the latest from China’s leadership about efforts to prop up small and medium enterprises (SMEs), which are flailing in the face of a wider clampdown on riskier credit, a slowdown in economic growth and the escalating trade war between the United States and China. “Government departments are encouraged to take multi-pronged approach,” Chinese Premier Li Keqiang said during a cabinet meeting , Xinhua said. “No loans extended should be willfully withdrawn,” he said. China will adopt more targeted measures to boost the financial sector’s support for the real economy and tackle financing difficulties for small and micro businesses, the State Council’s meeting, chaired by Li, decided. Li focussed on the importance of clear methods to implement the assistance for SMEs and measures to encourage financial institutions to increase their loans to SMEs and cut their financing costs, said Xinhua. Major commercial banks were called upon to cut their average lending rate for SMEs by 1 percentage point in the fourth quarter, compared with the first quarter, and remove unnecessary procedures and surcharges for financing, Xinhua said. The People’s Bank of China, the central bank, has cut the required reserve ratio for commercial banks four times this year, releasing 2.3 trillion yuan ($330.68 billion). By the end of September, outstanding loans for micro and small firms hit over 33 trillion yuan, up 11.4 percent on-year. Collateral that qualifies for use in the medium-term lending facility will be expanded to cover loans for SMEs with a credit quota of up to 10 million yuan per company, added Xinhua. Support will be given to firms for equity and bond financing. Financial institutions will be encouraged to make SME lending part of their internal performance evaluations and provide incentives to do so, the Xinhua report said. The meeting also discussed ways to use government-managed guarantee funds to make more financial resources available to SMEs.