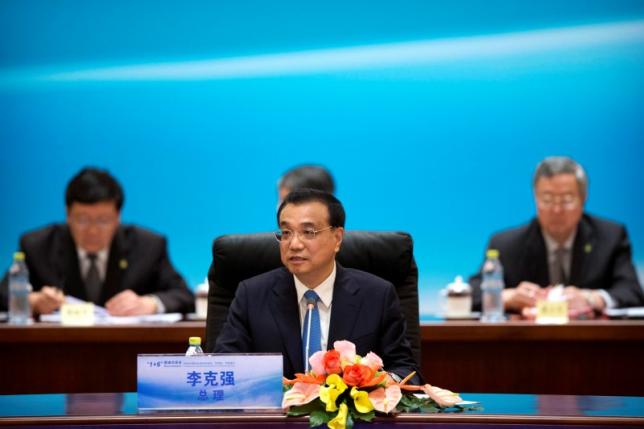 BEIJING - The world must step up international macroeconomic policy coordination, China's Premier Li Keqiang said on Friday after meeting the heads of the International Monetary Fund, the World Bank, and other senior global economic officials. Li also said the sound fundamentals of China's economy remained unchanged despite facing strong downward pressure, and that the debt ratio of the Chinese government was not high. He made the remarks at a joint briefing with the officials, which also included the heads of the World Trade Organization, the International Labour Organisation, the Organization for Economic Cooperation and Development, and the Financial Stability Board. The comments came ahead of a meeting of G20 finance ministers and central bank governors in China this weekend. US Treasury Secretary Jack Lew said on Thursday that G20 finance officials do not need to take the same type of massive coordinated fiscal stimulus efforts used to combat recession during the 2008-2009 global financial crisis. Lew, speaking to reporters before flying to Chengdu, said that member countries needed to take actions to support growth that are appropriate for their circumstances, including fiscal and monetary actions and structural reforms aimed at boosting efficiency. Unlike many developed economies, China still has ample ammunition left for further fiscal and monetary policy stimulus. China's economy grew slightly faster than expected in the second quarter as a government spending spree and housing boom boosted industrial activity, but a slump in private investment growth is pointing to a loss of momentum later in the year. The world's second-largest economy grew 6.7 percent in the second quarter from a year earlier, steady from the first quarter but still the slowest pace since the global crisis, data showed last week. Analysts had expected it to dip to 6.6 percent. While fears of a hard landing have eased, investors worry a further slowdown in China and any major fallout from Britain's decision to leave the European Union would leave the world more vulnerable to the risk of a global recession. International Monetary Fund Managing Director Christine Lagarde said at the briefing that uncertainty over Brexit should be removed as soon as possible. That uncertainty prompted the IMF to cut its global growth forecasts for the next two years on Tuesday. But signs of steadier headline growth in China may conceal an economy that is growing increasingly lopsided, as growth becomes ever more reliant on government spending and debt. An anaemic private sector and signs of fatigue in the property market point to the increasing possibility the government may need to provide additional stimulus this year to hit its growth target of 6.5 to 7 percent. -Reuters