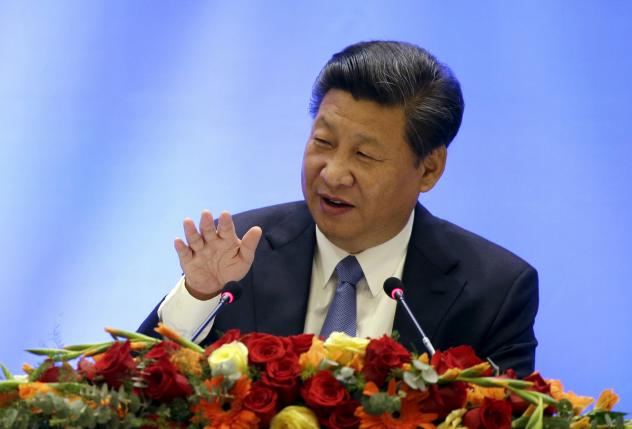 SEATTLE – Seeking to warm bilateral ties and project a sunny climate for US business, Chinese President Xi Jinping vowed on Wednesday to cut restrictions on foreign investment, while his chief Internet regulator appeared to lay the groundwork for a basic agreement later this week on cyber warfare. Xi's busy stop on the West Coast is the first leg of a week-long trip to the United States and offers him a chance to highlight China's cooperation with US companies before he heads to Washington, where he will contend with the full spectrum of irritants in relations, from tension in the South China Sea to human rights. The Chinese leader started the day by publicly assuring U.S. business leaders that he is making it easier to invest in China, and he was later quizzed in a private session about intellectual property protection, common standards and clear, transparent regulations, according to the Paulson Institute, which hosted the event. "We are working to create a new open economic system, push forward reform of foreign investment management and greatly reduce the restrictions on foreign investment," Xi told the gathering of executives in Seattle, including Apple Inc Chief Executive Tim Cook and Berkshire Hathaway's Warren Buffett. "GM and Ford can increase their investment in China," Xi said. A few hours after, Boeing Co announced plans for an aircraft finishing center in China, its first outside the United States. To the east of Seattle, at Microsoft’s campus in Redmond, China's top Internet regulator told US tech executives that both countries must work together on cyber security issues, including crime and espionage, addressing one of their most pressing concerns. VISITS MICROSOFT CAMPUS, HIGH SCHOOL Xi later visited Microsoft's campus in Seattle where he was greeted by co-founder Bill Gates, CEO Satya Nadella and other top executives. He was then led to a gathering of American and Chinese CEOs and was greeted, among others, by Facebook CEO Mark Zuckerberg, who spoke to the Chinese leader in Mandarin. The conversation, which was private, lasted about a minute. Facebook is banned in China. Although some companies had privately spread word that the meeting with their CEOs could prove significant and last an hour or more, in fact it was little more than pleasantries and a photo op. A Microsoft spokeswoman said that Xi spoke for about six minutes and that none of the US business leaders responded. Late on Wednesday, Xi sampled a bit of American teen culture, visiting Lincoln High School in Tacoma, south of Seattle, along with first lady Peng Liyuan. “We are on the same boat,” said Lu Wei, at the eighth annual meeting of the US-China Internet Industry Forum. “The only choice we have is to cooperate.” In a closed-door session afterwards, Lu gave the impression that China and the United States were set to reach some kind of agreement on cyber warfare, banning attacks on infrastructure in peacetime, according to one person present, who asked not to be named given the privacy of the meeting. Samm Sacks, an analyst at US-based consulting firm Eurasia Group, said that American business leaders remain chiefly concerned with cyber theft targeting corporate secrets, though any renewed cyber crime dialogue with Washington likely would be limited in scope and not deal with corporate espionage. “Overall, I do not see any meaningful progress on cyber issues or a shift in Beijing's approach toward US tech companies in China,” Sacks said. They watched the school’s football team practice before addressing students in a packed auditorium. Xi urged the students to carry on the spirit of ping pong diplomacy that 40 years ago was so important to boosting US-China relations. "Ping pong balls are small. Much smaller than the American football," Xi deadpanned, as the auditorium erupted in laughter. BOEING TO BUILD PLANT IN CHINA The world's biggest plane maker's long-expected move into low-cost China followed its news of a big order for some 300 planes from China, valued at about $38 billion at list prices. But the finishing center plan has not been popular with labor unions and also attracted the ire of leading Republican presidential hopeful Donald Trump, who said it would take jobs away from the United States. Xi toured the Everett, Washington, factory where Boeing its largest aircraft, and was shown a demonstration on board a 787 Dreamliner, which is popular with Chinese airlines. The plant would showcase the new spirit of cooperation touted by Xi, but several Boeing workers protested outside the Everett plant. "We don't have a problem with China. We have a problem that this could equate to machinists losing jobs," said Joel Hetland, 57, a structures mechanic on the 787, while waving a sign. "They (Boeing) don't have to worry about the EPA (Environmental Protection Agency) there, they don't have to worry about human rights, they don't have to worry about the 40-hour work week." Boeing said the China facility would not reduce employment on 737 production in Washington state. INVESTMENT RULES Xi's comments on foreign investment were designed to please U.S. business. China has repeatedly pledged to loosen restrictions on foreign investment as it tries to improve inefficient state-owned firms and adopt market-friendly policies to stave off slowing growth, but foreign business groups say that so far action has not kept pace with promises. U.S. investors would like a bilateral investment treaty that would give them increased access to state-dominated industries such as telecommunications and financial services. Xi said a key part of China's reforms would be to reduce the scope of the current "negative list" of industries in which foreigners could not invest. He added: "Our positive list will be bigger, a longer list. We will continue to build an open and law-based environment." Chinese regulators issued a negative list of prohibited and restricted industries for foreign investors in March, though business lobbies have complained that the government has been reluctant to cede too much control over sectors it deems central to national interests. –Reuters