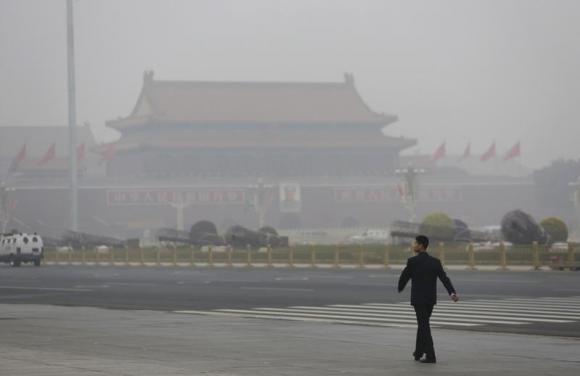 BEIJING - China's smog-hit capital Beijing has shut down the third of its four coal-fired power plants as part of its campaign to cut pollution, with the final one scheduled to close next year, the official Xinhua news agency said on Friday. In 2013, the city promised in its clean air action plan to bring annual coal consumption down to less than 10 million tonnes by 2017, a reduction of 13 million tonnes in just four years. It said it would shut down all four of its coal-fired power plants within four years, a move that would cut annual coal consumption by around 9 million tonnes. Officials also plan to reduce coal combustion in heating systems and industrial facilities, partly by switching to natural gas and by relocating some factories out of the city, and to phase out coal consumption completely by 2020. A 400-megawatt facility owned by the Guohua Electric Power Co. Ltd was shut on Friday and replaced with a gas-fired plant. It followed the closure of a 93-year-old power station run by Beijing Jingneng Power on Thursday. It shut its first coal-fired plant, the 600-MW Gaojing facility owned by the China Datang Corporation, last July. Average levels of hazardous airborne particles known as PM2.5 stood at 85.9 micrograms per cubic meters in 2014, down 4 percent compared with the previous year, but still far higher than the national air quality standard of 35 micrograms. Beijing plans to bring readings down to 60 by 2017, the municipal environmental bureau said earlier this year. Only eight of the 74 Chinese cities monitored by the Ministry of Environmental Protection met smog standards in 2014. Seven of the 10 worst-performing cities were in the province of Hebei, which surrounds Beijing. – Reuters