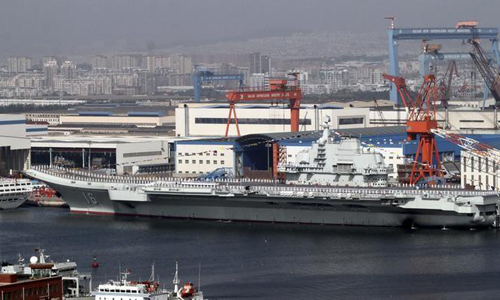 TAIPEI - A group of Chinese warships led by the country's sole aircraft carrier entered the top half of the South China Sea on Monday after passing south of Taiwan, the self-ruled island's Defense Ministry said of what China has termed a routine exercise.
The move comes amid renewed tension over Taiwan, which Beijing claims as its own, ineligible for state-to-state relations, following U.S. President-elect Donald Trump's telephone call with the island's president that upset Beijing. The Soviet-built Liaoning aircraft carrier has taken part in previous exercises, including some in the South China Sea, but China is years away from perfecting carrier operations similar to those the United States has practiced for decades.
Taiwan's Defense Ministry said the carrier, accompanied by five vessels, passed southeast of the Pratas Islands, which are controlled by Taiwan, heading southwest.
The carrier group earlier passed 90 nautical miles south of Taiwan's southernmost point via the Bashi Channel, between Taiwan and the Philippines. "Staying vigilant and flexible has always been the normal method of maintaining airspace security," said ministry spokesman Chen Chung-chi, declining to say whether Taiwan fighter jets were scrambled or if submarines had been deployed. Chen said the ministry was continuing to "monitor and grasp the situation". Senior Taiwan opposition Nationalist lawmaker Johnny Chiang said the Liaoning exercise was China's signal to the United States that it has broken through the "first island chain", an area that includes Japan's Ryukyu Islands and Taiwan. In Beijing, Chinese Foreign Ministry spokeswoman Hua Chunying said people should not read too much into what the carrier was up to, as its movements were within the law. "Our Liaoning should enjoy in accordance with the law freedom of navigation and overflight as set by international law, and we hope all sides can respect this right of China's," she told a daily news briefing. Influential state-run Chinese tabloid the Global Times said the exercise showed how the carrier was improving its combat capabilities and that it should now sail even further afield. "The Chinese fleet will cruise to the Eastern Pacific sooner or later. When China's aircraft carrier fleet appears in offshore areas of the U.S. one day, it will trigger intense thinking about maritime rules," the newspaper said in an editorial. China has been angered recently by U.S. naval patrols near islands that China claims in the South China Sea. This month, a Chinese navy ship seized a U.S. underwater drone in the South China Sea. China later returned it. Japan said late on Sunday it had spotted six Chinese naval vessels including the Liaoning traveling through the passage between Miyako and Okinawa and into the Pacific. Japan's top government spokesman said on Monday the voyage showed China's expanding military capability and Japan was closely monitoring it. China's air force conducted long-range drills this month above the East and South China Seas that rattled Japan and Taiwan. China said those exercises were also routine. Last December, the defense ministry confirmed China was building a second aircraft carrier but its launch date is unclear. The aircraft carrier program is a state secret. Beijing could build multiple aircraft carriers over the next 15 years, the Pentagon said in a report last year. China claims most of the South China Sea through which about $5 trillion in ship-borne trade passes every year. Neighbors Brunei, Malaysia, the Philippines, Taiwan and Vietnam also have claims. -Reuters