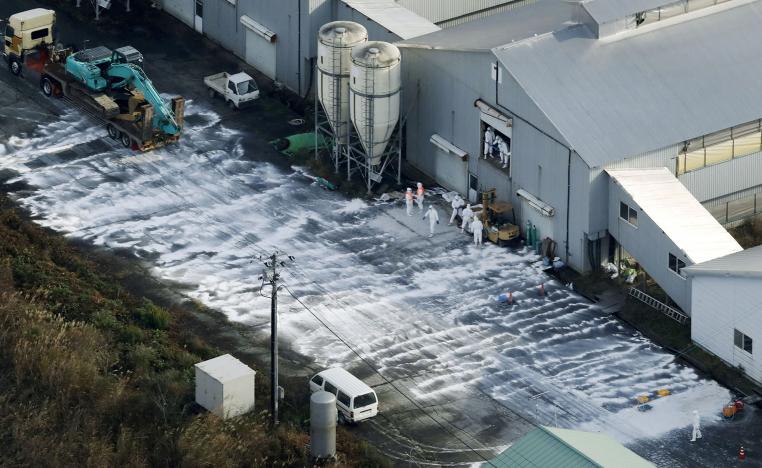 BEIJING/SEOUL – Chinese chickens are being fed more vitamins and vaccines as jittery farmers ramp up hen-house sterilization in a bid to protect flocks against a virulent strain of airborne bird flu that has led to record culling in nearby South Korea.
While Seoul has ordered the gassing of 20 million birds since the first case of the H5N6 virus was reported on Nov. 18, outbreaks in Japan and three confirmed cases in mainland China in the last two months have stoked fears of regional spread. Hong Kong on Tuesday confirmed its first human bird flu infection of the season. Fears of the virus' spread have spooked farmers preparing for the year's peak meat demand during Lunar New Year celebrations. The last major outbreak in 2013 killed 36 people and caused some $6.5 billion in losses to the agriculture sector.
"We are worried," said the manager of a state-owned 100,000 bird farm in Shandong province who gave his surname as Tan. "We are stepping up our existing anti-epidemic measures."
"We feed them (chickens) healthcare products, vitamins and anti-virus medicine," said Tan, who declined to give his first name as he was not authorized to speak to media. "Previously we fed them (vitamins and medicine) once every three months, but starting from wintertime we feed them once every week," said Tan, citing outbreaks in other countries as a concern. IMPORTS BANNED The measures introduced at Tan's farm echo those being put in place elsewhere and draw on experiences gained during the damaging 2013 outbreak in China, the world's no. 3 producer of broiler chickens and the second-biggest poultry consumer. In recent years, farmers have increased cleaning regimes, animal detention techniques, and built roofs to cover hen pens, among other steps. Official delegations from Japan, South Korea and China gathered in Beijing last week for a symposium on preventing and controlling bird flu and other diseases in East Asia, according to the website of China's ministry of agriculture. China now has bans in place on poultry imports from more than 60 countries, including South Korea and Japan. The bird flu outbreaks in Japan are the first in nearly two years. Japan started a fresh cull of chickens last weekend after a fifth outbreak since the end of November. More than 780,000 chickens and ducks have been culled in the country since an outbreak of H5N6 virus at a poultry farm in Aomori prefecture on Japan's most populous island of Honshu on Nov. 28. Last month, China added five nations - the Netherlands, Sweden, Denmark, Russia and Austria - to its list of banned suppliers of poultry imports as concern grows about the spread of disease. Parts of Europe and Israel have been hit by the H5N8 strain of the virus in recent weeks. At Beijing Huadu Yukou Poultry Industry Co Ltd, a major chicken breeder based in Pinggu, near the capital, chief veterinary officer Liu Changqing said disease prevention systems have been ramped up and the firm believes its birds will be protected. "Bird flu is the number one thing that farmers guard against. It spreads so quickly, it can bankrupt you," Liu warned. –Reuters