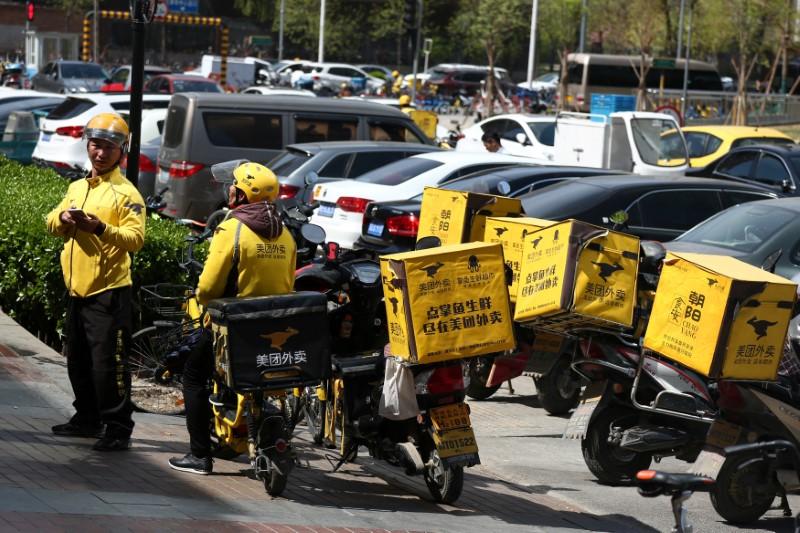 HONG KONG (Reuters) - China’s Meituan-Dianping, an online food delivery-to-ticketing services platform, is bringing its sizable initial public offering (IPO) to Hong Kong, where it aims to raise over $4 billion, three people with knowledge of the deal said. The firm filed plans late on Friday for the city’s second multibillion-dollar tech float this year after smartphone maker Xiaomi Corp’s blockbuster IPO of up to $6.1 billion. Meituan-Dianping is also - after Xiaomi - the latest company with a dual-class share structure to file for a Hong Kong listing, under the city’s new rules designed to attract tech companies. The Beijing-based firm, backed by gaming and social media company Tencent Holdings Ltd, was valued at around $30 billion in a fundraising round last year. It is aiming for a $60 billion valuation with the IPO, though industry insiders said it may have difficulty reaching that target as it is still money-losing and relies on a cash-burning business model to boost growth. The firm is likely to list in October, said the people, who declined to be identified as the information was not public. Meituan-Dianping did not detail the amount of funds targeted or a time frame. It declined to comment on its planned IPO when contacted by Reuters. Founded in 2010 by serial entrepreneur Wang Xing, Meituan, likened to US discounting platform Groupon Inc , in 2015 completed a $15 billion merger with Dianping, akin to US online review firm Yelp Inc . It offers a broad range of services including movie ticketing, food delivery, hotel and travel booking as well as ride-hailing. Competitors include food-delivery platform Ele.me, backed by e-commerce firm Alibaba Group Holding Ltd , and leading ride-hailing firm Didi Chuxing, backed by Japan’s SoftBank Group Corp . In its draft prospectus, which gave investors the first detailed look at its financial health ahead of the IPO, the company disclosed a 19 billion yuan ($2.9 billion) loss for 2017, steeper than in the previous two years. Its adjusted net loss - which excludes the impact of fair value changes of convertible redeemable preferred shares and other items - was 2.85 billion yuan, smaller than losses of 5.35 billion yuan in 2016 and 5.91 billion yuan in 2015, the prospectus showed. Revenue rose to 33.9 billion yuan in fiscal 2017, sharply higher than the 12.99 billion yuan made in the prior year. Meituan-Dianping’s other backers include venture capital firms Sequoia Capital and DST Global, Singapore sovereign wealth fund GIC Pte Ltd and state-owned investment company Temasek Holdings (Private) Ltd, as well as the Canada Pension Plan Investment Board. Currently, Chief Executive Wang Xing owns 11.4 percent of the company, while Tencent owns 20.1 percent and Sequoia Capital 11.4 percent. Wang will remain controlling shareholder after the listing, the prospectus showed. Being holders of Class A shares, Wang and two other co-founders, Mu Rongjun and Wang Huiwen, will be beneficiaries of a weighted voting rights structure, or dual-class shares, which give greater power to founding shareholders even with minority shareholding. Each Class A share has 10 votes while each Class B share has one vote. The firm has mandated Bank of America Merrill Lynch, Goldman Sachs Group Inc  and Morgan Stanley to jointly sponsor its IPO. China Renaissance is the financial adviser.