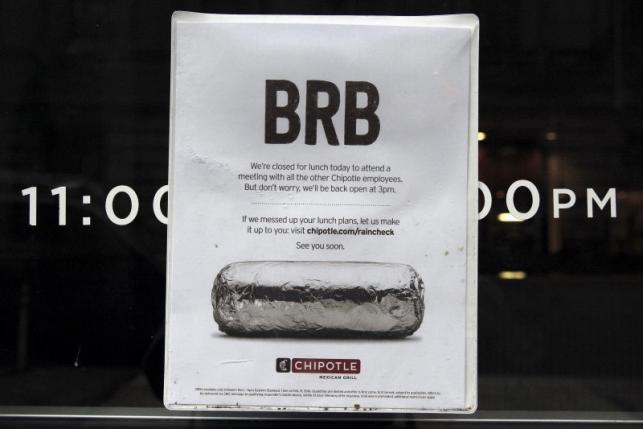 NEW YORK - Chipotle Mexican Grill closed all of its US restaurants during prime lunchtime hours to hold staff meetings on food safety guidelines, sparking offers from rivals eager to poach customers of the burrito chain as it recovers from several food-borne outbreaks.

More than 50,000 Chipotle employees crowded into rented movie theaters and other locations to hear live video feeds of co-Chief Executives Steve Ells and Montgomery Moran laying out their program to improve restaurant safety.

They described plans, already outlined to investors, to central processing of ingredients like tomatoes and bell peppers, increase testing of ingredients and to discourage sick workers from coming to the restaurant by offering paid sick leave.

Chipotle's shares have lost nearly a third of their value and sales have plunged about 30 percent since November, when first reports of E. Coli sickness linked to the chain emerged. E. Coli sickened more than 50 people in 14 states.

Chipotle also faced two separate norovirus outbreaks, and the company said earlier this month it was the subject of a national criminal investigation, related to an outbreak.

Ells said he was deeply sorry that some people became ill after eating at Chipotle and was "committed to make sure it won't happen again," according to company tweets.

Posters on Chipotle store windows offered a free "raincheck" burrito to customers who could not get lunch.

The Chipotle executives also said the company would spend about $10 million to help local suppliers adhere to the company's new safety measures.

One Chipotle worker, Francisco, 23, who said he worked on New York City's Upper West Side, described the meeting as going well and said that colleagues had asked questions about how to prepare food more safely.

Excerpts of the meeting were broadcast over Twitter Inc's live-streaming app Periscope and in tweets. The meeting started at 11:00 a.m. ET and restaurants opened at 3 p.m.

Last week, the chain reported its first decline in quarterly same-store sales as a public company, hurt by a sharp drop in customer visits due to the outbreaks.

Chipotle's shares closed down 3.3 percent on Monday, compared with a 1.4 percent decline in the S&P 500 index. -Reuters