WHO: Cholera could resurge in Yemen due to lack of aid, fuel 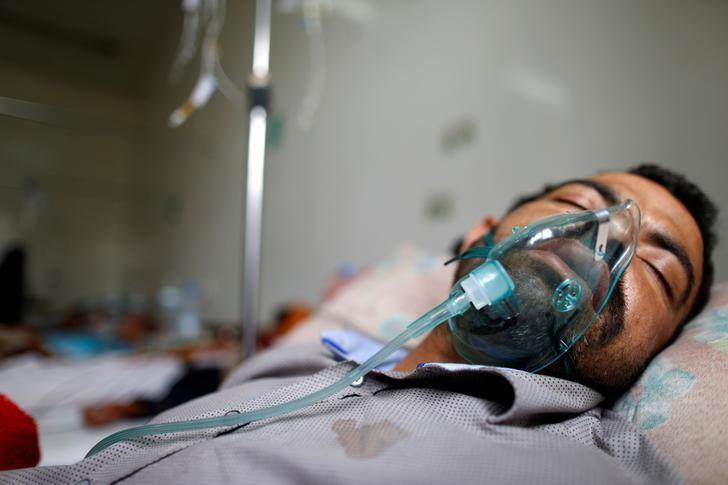 WHO: Cholera could resurge in Yemen due to lack of aid, fuel

GENEVA (Reuters) - Another wave of cholera could strike Yemen, where a Saudi-led coalition blockade has cut off fuel for hospitals, water pumps and vital aid supplies for starving children, the World Health Organization (WHO) said .

Dr. Nevio Zagaria, WHO country representative in Yemen, told Reuters that 16 percent of Yemeni children under the age of five suffer from acute malnutrition, including 5.2 percent with a severe form that is life-threatening, and the problem is increasing.

Yemen, where 8 million people face famine, is mired in a proxy war between the Iran-aligned Houthi armed movement and the U.S.-backed military coalition that the United Nations says has led to the world's worst humanitarian crisis.

Some 960,000 suspected cases of cholera and 2,219 deaths have been reported since the epidemic began in April, WHO figures show.

Children account for nearly a third of infections of the waterborne disease, spread by food or water contaminated with human feces, that causes acute diarrhoea and dehydration and can kill within hours if untreated.

Although the number of new cases has dropped for 11 straight weeks, 35 districts in Yemen are still reporting cholera with "high attack rates" in communities, Zagaria said.

A deteriorating economic situation and lack of safe drinking water, due to water sewage systems in many cities lacking fuel for the pumps, have compounded the humanitarian crisis, he said.

"This is a perfect mix to have a new explosion of a cholera epidemic at the beginning of the rainy season in March of next year," Zagaria said in a telephone interview from Sanaa, amid four days of clashes in the capital city.

WHO is working with local authorities in both the internationally recognised government and Houthi-controlled Sana'a to identify areas at highest risk of a spike in the cholera epidemic and to boost defences, he said.

A campaign of oral cholera vaccination - initially planned last July during an acute phase and then abandoned by authorities - is now under reconsideration but as a preventive action next year, he said.

Meanwhile, a ship carrying 35 tonnes of WHO surgical and medical supplies is being diverted to Aden after waiting weeks to offload at Hodeidah port, Zagaria said.

"We are waiting and hoping that the situation of the blockade will be resolved. We have an opening to the humanitarian blockade but the opening to the commercial blockade is only partial," he added.

The United Nations appealed on Friday to the coalition to fully lift its blockade of Yemen, which was partially eased last week to let aid into Hodeidah and Salif, and U.N. flights into Sanaa.

The U.S.-backed military coalition closed air, land and sea access on Nov. 6 in a move it said was to stop the flow of Iranian arms to the Houthis, who control much of northern Yemen.

Aid shipments cover only a fraction of Yemen's needs, since almost all food, fuel and medicine are commercially imported.

"The (fuel) contractors that we are working with are finding difficulty in keeping the stock," he said, noting that some hospitals require 60,000 litres of fuel per month.

WHO runs 15 stabilisation centres for severely acute malnourished children with medical complications and is expanding with 10 more, Zagaria said.

"We see that there is a constant flow of newly admitted patients to these centres.

"The deterioration of the situation in terms of malnutrition in children is increasing... It is very difficult to quantify with precise numbers," said Zagaria, who went to the intensive care unit of the pediatric ward in Sadaa last week.

"I am a pediatrician, I worked many years in Africa. You don't need to take the weight and the height."