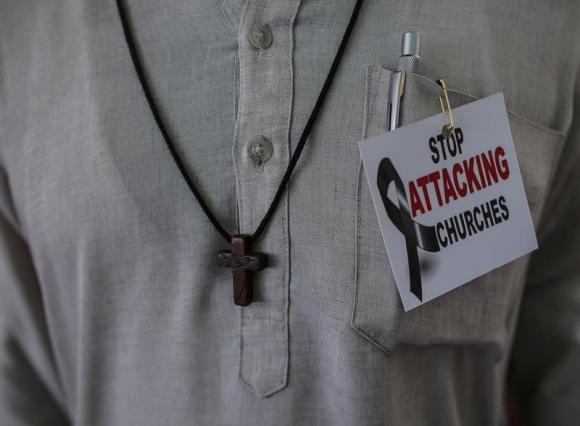 KOLKATA - Christians in India said on Monday that the government of Prime Minister Narendra Modi had not done enough to protect their religion, after a spate of attacks including the rape of a 75-year-old nun at the weekend. Christians prayed and held vigils across the country to protest against the rape during an armed assault on a convent school, the worst in a series of incidents that followers of the faith say are making them feel unwelcome in their own country. The convent attack also comes in the same month an interview emerged of a man being held on death row for a fatal gang rape in which he showed no remorse and blamed the victim. The government banned the documentary, "India's Daughter", a decision which angered some Indians who said it should be aired to highlight the prevalence of gender inequality and sex crimes. Father Savari Muthu, spokesman for the Delhi Catholic Archdiocese and a national Church organiser, said the government had not taken "concrete action to protect Christians. "We have to raise our voice against the atrocities. Christians will not tolerate this humiliation," he said, joining critics who say Modi has not done enough to ensure religious harmony in a country with a history of inter-faith bloodshed. The motive for the assault and armed robbery in West Bengal on Saturday was not clear. MOTHER TERESA LEGACY QUESTIONED It happened weeks after the leader of Rashtriya Swayamsevak Sangh (RSS) said the charitable work of Mother Teresa had been aimed at religious conversion. Critics say the remarks by the leader of RSS, an organization close to the government, contributed to a climate where Christians are seen as outsiders, despite a more than 1,500-year presence in India. "I am not Indian any more, at least in the eyes of the proponents of the Hindu Rashtra," prominent retired police chief Julio Ribeiro wrote in a column for the Indian Express paper. The RSS condemned the rape. "No attack should be tolerated on any woman in India. Be it a Hindu, a Muslim or a Christian," Suresh Joshi, RSS general secretary, told reporters on Sunday. Opposition lawmakers in the upper house of parliament on Monday said the attack could damage the secular fabric of the country, where about a fifth of 1.27 billion people identify themselves as belonging to faiths other than Hinduism. The large majority of those are Muslims. Since December, half a dozen churches have been vandalised, at the same time as conservative groups have campaigned to convert to Hinduism members of "foreign religions" such as Islam and Christianity. In February, shortly after US President Barack Obama called for respect for religious freedom in India, Modi broke a long silence on the subject and, speaking at a church event, vowed a crackdown on religious violence. Muthu said schools across the country were holding prayer meetings on Monday. Christians held a silent protest in the streets of Mumbai on Sunday. Protesters demanded more security for churches and other religious institutions. On Sunday, a Catholic church being built in the northern state of Haryana was vandalised and its cross replaced with a small statue of a Hindu god. Police in West Bengal said they had detained five of seven men who broke into the Convent of Jesus and Mary School in Nadia district, northeast of Kolkata, capital of West Bengal. The man suspected of rape has not been caught. The rape victim was discharged from hospital on Sunday night and appealed for peace, said Jaydeep Saha, a police official investigating the crime.