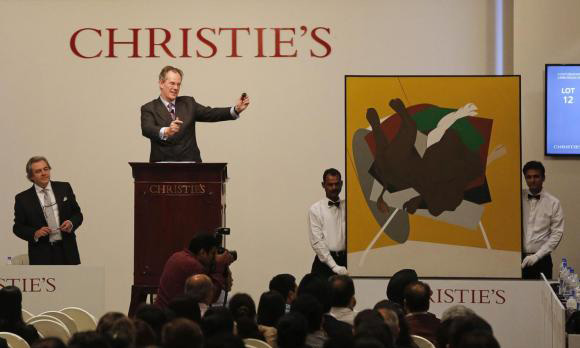 NEW YORK - Records look set to tumble at the big spring art auctions with Christie's' announcement on Wednesday of a Picasso oil poised to set the mark for the most expensive work of art in auction history. "Les femmes d'Alger (Version “O”)," a vibrant cubist work last auctioned in 1997 when it nearly tripled the expected price, is estimated to fetch about $140 million, by far the highest price ever for a work of art on the auction block. Pre-sale estimates do not include the standard commission of just over 12 percent, making for a final price in excess of $155 million if Christie's has accurately assessed the work's appeal to a global, deep-pocketed market hungry for a dwindling supply of trophy works. The most expensive work ever sold at auction, Francis Bacon's triptych "Three Studies of Lucian Freud," sold for $142.4 million including commission in November 2013, although several works have sold for more on the private market. "It has become clear that the many new global collectors chasing masterpieces have been waiting for an iconic Picasso to appear on the market," said Jussi Pylkkanen, Christie’s global president. "None is more iconic than 'Les femmes d'Alger.'" Brooke Lampley, head of Impressionist and Modern art at Christie's New York, spoke to what she called the work's remarkable power. "This is Picasso the maverick astonishing us with his skills while paying tribute to the great masters who came before him," including Ingres, Delacroix, and his great rival Matisse. "It's the perfect painting to headline a new sale dedicated to artistic innovation and inspiration," she added, referring to Christie's' May 11 sale, "Looking Forward to the Past" which augments its semi-annual auctions of Impressionist/modern and contemporary art. Picasso painted a series of 15 variations on Delacroix’s "Les femmes d'Alger" between December 1954 and February 1955, designating his versions A through O, and conceived as an elegy to his friend and great rival Henri Matisse, who died weeks before Picasso began his series. In recent years Version O has graced galleries at the Louvre in Paris, London's National Gallery and the Tate Britain. The work was part of the collection of Victor and Sally Ganz, which in 1997 set an auction record for any single owner sale, totaling $206.5 million. Before being sold, the painting will go on an international tour with public displays in Hong Kong, London and New York. - REUTERS