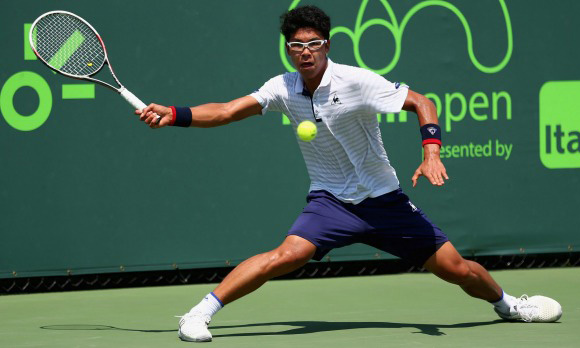 MIAMI - South Korean teenager Chung Hyeon won his first ATP Tour-level match at the Miami Open with a stunning 6-0 4-6 6-4 upset of 50th ranked Spaniard Marcel Granollers on Wednesday. The 18-year-old Suwon native needed two hours and 13 minutes to secure a victory that will make many take notice of the 2013 Wimbledon Junior Championship finalist. "It was tough - the weather, the conditions and playing against a high-ranked player, everything was tough," said Chung. "But I was motivated - I knew if I won that I would get an even better opportunity to play a better player." The Korean, who wears glasses during matches due to a developmental eye disease, has risen to 121st in the world and his reward for his victory is a tough test against eighth seed Czech Tomas Berdych. American Jack Sock, who reached the fourth round at Indian Wells last week before losing to Roger Federer, advanced with a 6-3 6-4 win over Japan's Go Soeda. In an all-German clash, Jan-Lennard Struff saved three match points as he got past Benjamin Becker 3-6 7-6 (10) 6-4. Australian qualifier James Duckworth defeated Bosnian Damir Dzumhur to earn a meeting with Spain's Fernando Verdasco. Britain's Andy Murry will face American Donald Young after his opponent, Lu Yen-hsun of Taiwan retired in the first set due to a neck injury. - REUTERS