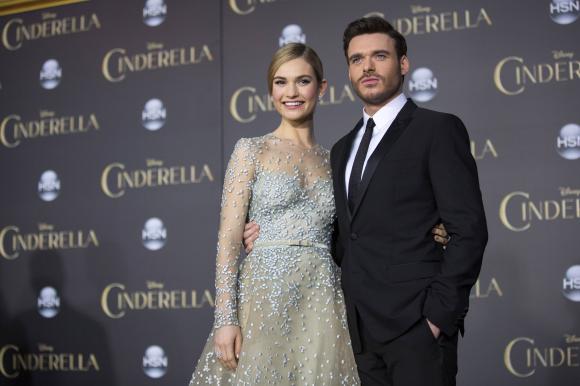 LOS ANGELES - "Cinderella" enchanted audiences this weekend, racking up a royal $70.1 million to lead the domestic box office and a massive $132 million globally. The adaptation of the classic fairy tale follows Walt Disney Studios' strategy of raiding its library of animated favorites to refashion as live action blockbusters -- an approach that yielded such successes as "Maleficent" and "Alice in Wonderland," and one the studio plans to employ on "Dumbo" and "Beauty and the Beast." "From a company perspective and a public perspective, fairy tales are a part of our DNA," said Dave Hollis, Disney's distribution chief. "This is decidedly something that Disney does and does well." "Cinderella's" popularity left Liam Neeson's latest action-adventure, "Run All Night," huffing and puffing at the finish line. The Warner Bros. release pulled in a lackluster $11 million from 3,171 theaters, lower than pre-release tracking which suggested a debut in the $15 million range. The audience for the story of a father protecting his son (Joel Kinnaman) from mob hit men was 52% female and 86% over the age of 25. Warner Bros. domestic distribution chief Dan Fellman said he was particularly surprised that the film attracted more women than to men. He added that the picture seemed to play better on the East Coast in cities like Washington D.C. and New York than it did on the West Coast. "I'm a little disappointed in the results," said Fellman. "We just got off to a slow start...we felt it should have been a stronger second place, but at this point we're hoping we get a good multiple and a great hold." It's possible that Neeson, who was recently seen making short work of European bad guys in January's "Taken 3," has simply been brandishing the gun a bit too much of late. "Run All Night" cost $50 million to produce, so it will need to attract foreign crowds if it wants to break even. "Cinderella" opened across 3,845 theaters in North America and cost $95 million to produce. Opening weekend crowds were 68% female, 66% families and 31% comprised of moviegoers under the age of 12. "This was a strong protagonist and an aspirational character," said Hollis. "We took the high bar reached by the classic animated film and built on it. This will now be something that complements the original." The film wasn't in 3D, but it did get a nice boost from other premium formats. Imax represent 7% of "Cinderella's" gross and premium large formats comprised 8% of the box office results. "Cinderella" couldn't match the $116.1 million debut of "Alice in Wonderland," but it did surpass the $69.4 million premiere of "Maleficent." That's impressive considering that despite featuring Cate Blanchett and "Downton Abbey's" Lily James, "Cinderella" lacked a star on the level of Johnny Depp or Angelina Jolie to bring in crowds. It also cost half of the roughly $200 million each that Disney spent producing those fantasies. "Cinderella" was a juggernaut overseas picking up an estimated $62.4 million, $25 million of which came from China. The film opened in about 60 percent of the international marketplace, including such major territories as Russia, Italy, Mexico and Germany. In the holdover realm, "Kingsman: The Secret Service" has now crossed the $100 million mark. The Fox action-adventure captured third place with $6.2 million, pushing its stateside haul to $107.4 million. "Focus," Will Smith's heist romance, snagged fourth position on the charts with $5.8 million. The Warner Bros. release has made $44 million after three weeks in theaters. Fifth place went to Fox Searchlight's "The Second Best Exotic Marigold Hotel" which held steady with $5.7 million from 2,022 theaters in its sophomore frame, dropping a mere 33% and bringing its total to $18.1 million. In limited release, Radius-TWC's "It Follows" impressed with $163,453 from four locations, for a per-screen average of $40,863. The horror film has enjoyed unusually strong reviews for the genre, with critics handing out a 95% "fresh" rating on Rotten Tomatoes. Among other art house releases, "Seymour: An Introduction," Ethan Hawke's look at a pianist and teacher debuted on two screens where it made $26,320 for a per-screen average of $13,160. Not everyone was as lucky as "It Follows." Official numbers have yet to be released but it appears that Adam Sandler's critically panned "The Cobbler" will eke out a meagre $21,00 from 17 theaters. After two weeks of lagging behind 2014's box office results, "Cinderella" helped lift domestic ticket sales more than 16% over the year-ago period to top out at $133 million. The key was providing some fresh all-ages fare to a marketplace that had been dominated by adult films such as "Fifty Shades of Grey" and "Focus." "It's been an R-rated world at the box office and for families this was a dream come true," said Paul Dergarabedian, senior media analyst at Rentrak. "They were sitting on sidelines and waiting for a family friendly weekend." As "Cinderella" proves, dreams do come true.