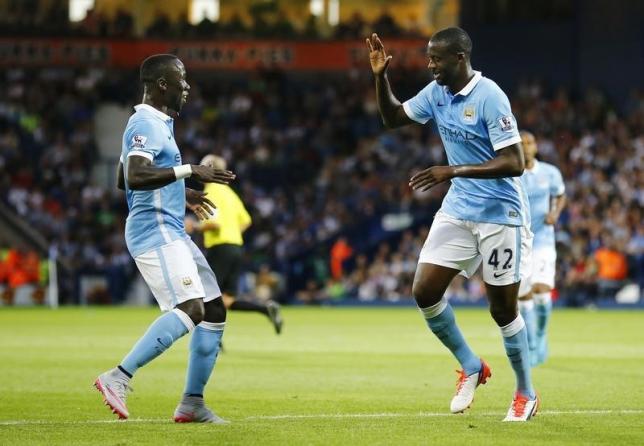 LONDON - The destination of the Premier League trophy will not be decided when current champions Chelsea meet their immediate predecessors Manchester City on Sunday, but the winners will get a welcome psychological boost for the long campaign ahead. The meeting between two of the main title contenders has come early in the season but three points are three points whether they are won in August or May. If Manchester City take them they will already be five clear of Chelsea whereas last season they never got their noses in front of Jose Mourinho's side. City began their campaign with an easy 3-0 win at West Bromwich Albion on Monday with Yaya Toure looking back to his imperious best, scoring the best goal of the season so far with City's second from the edge of the box. Toure's excellent display and an equally emphatic statement of intent from City's captain Vincent Kompany were both in contrast to many of their performances last season. "I know what I have to do and I don't care what people say about me. I'm not back -- I've always been there," a defiant Toure said at the Hawthorns. His manager Manuel Pellegrini, who has just signed a new deal with the club, did say Toure had had problems last season following the death of his brother Ibrahim, when Toure struggled in matches against the top sides. So he will be under scrutiny when Chelsea visit on Sunday. INDIFFERENT START Chelsea made an indifferent start with a 2-2 draw against Swansea City at Stamford Bridge but much of the focus since has been on the curious aftermath of the match with Mourinho banning the club's first team doctor Eva Carneiro from the bench. Mourinho was unhappy that Carneiro and physio Jon Fearn went on the pitch to treat Eden Hazard near the end. Chelsea were down to 10 men following the dismissal of goalkeeper Thibaut Courtois and because the medics had come on to the pitch, Hazard had to go off before he could resume playing, leaving Chelsea with nine men on the field. That incensed Mourinho and his banning order has made headlines since but what should concern him more was the way his team played. Courtois will miss Sunday's game with newly-arrived deputy Asmir Begovic taking his place. Petr Cech, Chelsea's first choice goalie for much of the past decade, is now at Arsenal and he will be hoping to put his miserable debut for the Gunners to the back of his mind at Crystal Palace on Sunday. Cech was at fault for both goals as Arsenal were shocked 2-0 at home by West Ham United on Sunday. Palace meanwhile go into the game after an impressive 3-1 win at promoted Norwich City. Palace have only beaten Arsenal three times in 37 meetings since they first clashed over 80 years ago and Arsenal have not lost a league match at Palace since 1979. Arsene Wenger's men, who won the FA Cup last season and started this season with a Community Shield victory over Chelsea, will be looking to bounce back immediately. The weekend starts with the re-introduction of a televised Friday night match with Aston Villa meeting Manchester United at Villa Park. Both teams won their opening matches last weekend so whoever wins on Friday will go top, at least until the rest catch up on Saturday and Sunday. -Reuters