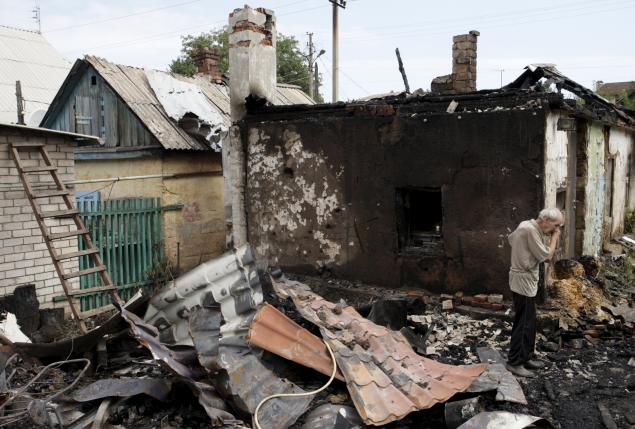 KIEV – Fighting flared between Ukrainian forces and Russian-backed rebels in separate parts of eastern Ukraine overnight, killing at least two Ukrainian soldiers and several civilians, Kiev's military and separatist sources said on Monday. The clashes, near the port of Mariupol in the southeast and at rebel-held Horlivka, further frayed an increasingly tenuous ceasefire as Ukraine prepared to mark its Independence Day next week. Kiev accused the separatists of shelling civilians on the outskirts of Mariupol. In Moscow, Russian Foreign Minister Sergei Lavrov blamed Kiev for the violence, giving no detail but saying he suspected Ukraine was preparing a new offensive.
Ukrainian President Petro Poroshenko meanwhile accused Russian President Vladimir Putin of trying to whip up tensions in eastern Ukraine by visiting Crimea, which Russia annexed from Ukraine last year. The Kremlin said Putin was promoting tourism on the peninsula.
The escalation has drawn expressions of concern from Western governments, which regard the ceasefire and tentative peace agreement worked out in Minsk, Belarus, in February as still the best chance of ending the rebellion in eastern Ukraine. Ukrainian military spokesman Andriy Lysenko said the rebels had used howitzers with a range of 15-16 km (10 miles) to shell Sartana, on Mariupol's northern edge. "The enemy was not shelling Ukrainian positions, but a civilian town," he told a briefing. "The enemy has now adopted the tactic of firing and then quickly withdrawing. The next time they'll get a quick response. What has happened in Sartana is a challenge to our forces." He said two Ukrainian soldiers had been killed and seven wounded by separatists in the past 24 hours. "GRAVE CONCERN" Regional police said at least one man and a young woman had been killed in Sartana. "On one street there were five houses that were really badly damaged by shell fragments. One house had a well-tended garden with vines and a vegetable patch. But the house had been wrecked by shells and I saw an enormous pool of blood," a local news photographer, Mykola Ryabchenko, told Reuters by telephone. The separatist website DAN quoted the separatist mayor of Horlivka as saying at least three people had been killed and four wounded as a result of government shelling of the town, a regular hot spot north of the main rebel stronghold of Donetsk. Lysenko said the rebels had used heavy weapons including Grad rockets in attacks on government forces around Horlivka. The upsurge in fighting combined with low oil prices on Monday to undermine Russia's rouble, which touched a six-month low against the dollar. U.S. Secretary of State John Kerry last week expressed "grave concern" to Lavrov over a rise in separatist attacks, and urged an immediate halt to shooting. Germany's foreign minister said the situation was explosive and urged the parties to prevent a spiral in violence. More than 6,500 people have been killed in the conflict, which erupted in April 2014 after Russia annexed Crimea in reaction to the fall of a Moscow-backed president in Kiev. Moscow went on to support the rebels in pressing for greater autonomy but denies sending them soldiers or arms, despite what the West and Kiev say is irrefutable proof. Poroshenko called Putin's visit to Crimea "a continuation of the plan to escalate the situation" as Ukraine prepares to mark its Independence Day on Aug. 24. –Reuters