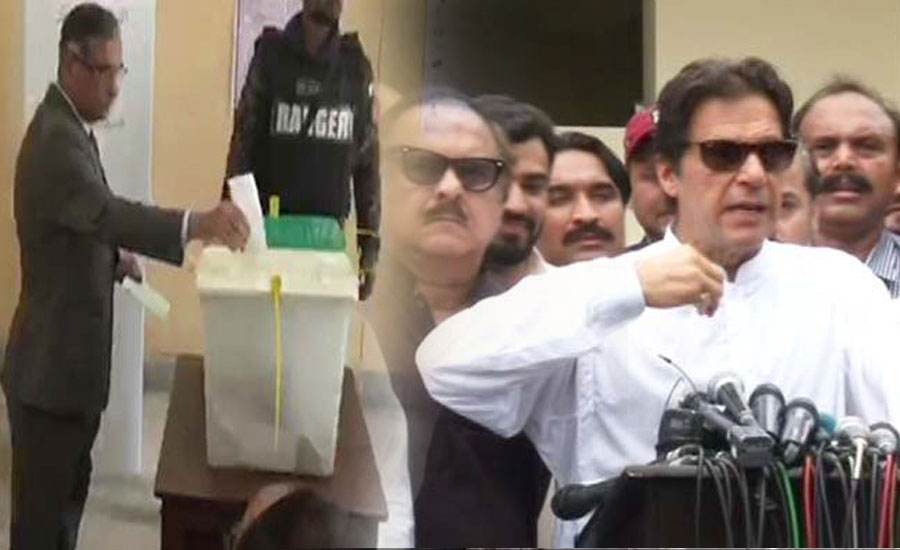 ISLAMABAD (92 News) – Chief Justice of Pakistan Justice Mian Saqib Nisar and casts his vote in NA-130 constituency and Pakistan Tehreek-e-Insaf chairman Imran Khan cast his vote in NA-53. As per details, the PTI chairman was accompanied by Naeem ul Haque and Zulfi Bukhari. Imran Khan cast his vote in NA-53, the constituency from where he is also contesting polls. Speaking to the journalist after casting his vote, Imran Khan appealed the people to use their right to vote for the future of Pakistan. He also said that two parties had been ruling Pakistan, adding this election is a opportunity to defeat 'Mafia' of the country. The PTI chief said that he will play against Nawaz Sharif till the last ball. PTI vice chairman Shah Mehmood Qureshi also casted his vote from NA-157. Talking to the journalist, he appreciated the ECP and the security officials authorities over arrangements. The PTI leader predicts a clean sweep for the party in Multan He shared his message with the nation that everyone must have casted his/her vote for whom they want. Polling across the country is being held today for general elections 2018. Polling began at 8am in the morning and will conclude at 6pm in the evening.