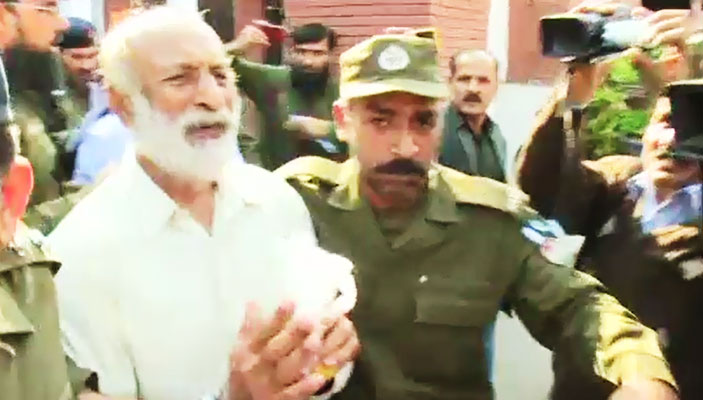 LAHORE (92 News) – Chief Justice of Pakistan (CJP) Justice Mian Saqib Nisar on Saturday scolded the Punjab Police and asked that this is Naya Pakistan’s police which cannot control land grabber Mansha Bomb. A two-member bench headed by the chief justice heard the suo motu case against land grabber Mansha Bomb at Lahore Registry Supreme Court. The top judge rebuked Punjab police for not being able to control Mansha Bomb over not returning the land recovered from Mansha Bomb to affected people. The apex court ordered DC Lahore that land should be returned to the concerned people by midnight today and a report be presented in this regard. During the hearing, the CJ remarked that the Punjab chief minister assured to return the land of concerned people and he launched operation only two days and stopped silently now. He also asked that how the Tehseldar is working in the areas of cities, they destroyed the system as well as they changed the ownerships of people with illegal ways. Justice Nisar expressed anger over absence of the SP, saying, “Many complaints have been received against Mansha Bomb and what report they are presenting,” CJ remarked. He rejected the report and asked DIG, “What is your relation with Mansha Bomb? Why are you defending him? You will not go back in your uniform.” “We are summoning Mansha Bomb, Afzal Khokhar and all others involved in this case.” Justice Nisar then ordered that Mansha Bomb be brought from the jail to court. Mansha Bomb was presented to court and he appealed for mercy from court with weeping and begging for apology. At this, the top judge said, “You have no fear of God when took possessions of the others’ land. Have you forgotten about your death?” The chief justice changed the judge on the complaint of the plaintiff against Mansha Bomb. The court directed IG to advertise for victims of Mansha Bomb and took strict action against the land mafia. The bench sought a report from DC Lahore and adjourned the hearing till tomorrow. On October 15, Mansha Bomb was arrested from the Supreme Court premises after he surrendered himself. Mansha and his sons are accused of illegally grabbing land in Lahore's Johar Town vicinity.