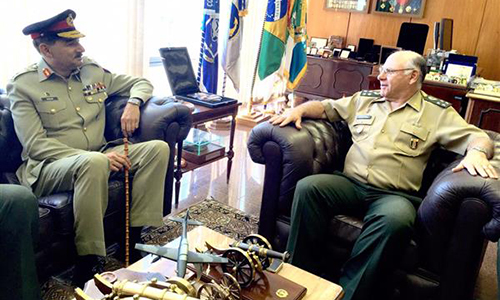 RAWALPINDI (92 News) – Chairman Joint Chiefs of Staff Committee General Rashad Mahmood, who is on an official visit to Brazil, visited Brazilian Ministry of Defence on Saturday, said a statement issued by ISPR. Upon arrival at the ministry, he was given the guard of honour. Later, he called on General Jose Carlos De Nardi, Brazilian Chief of Joint Staff, and held discussions on security challenges and matters related to bilateral cooperation in the field of defence industry, training and professional interests between the two armed forces. The CJCSC also visited Brazilian Army Headquarters and called on General Eduardo Dias da Costa Villas Boas, Brazilian Army Commander, and Lieutenant Brigadier Nivaldo Luis Rossato, Brazilian Air Force Commander. The Brazilian military leadership appreciated the efforts of Pakistan in eliminating the menace of terror and acknowledged the sacrifices made by Pakistan in the war on terror. Earlier, the CJCSC visited Superior War College, Brazil, and was briefed by the Commandant of the college on institutional matters.