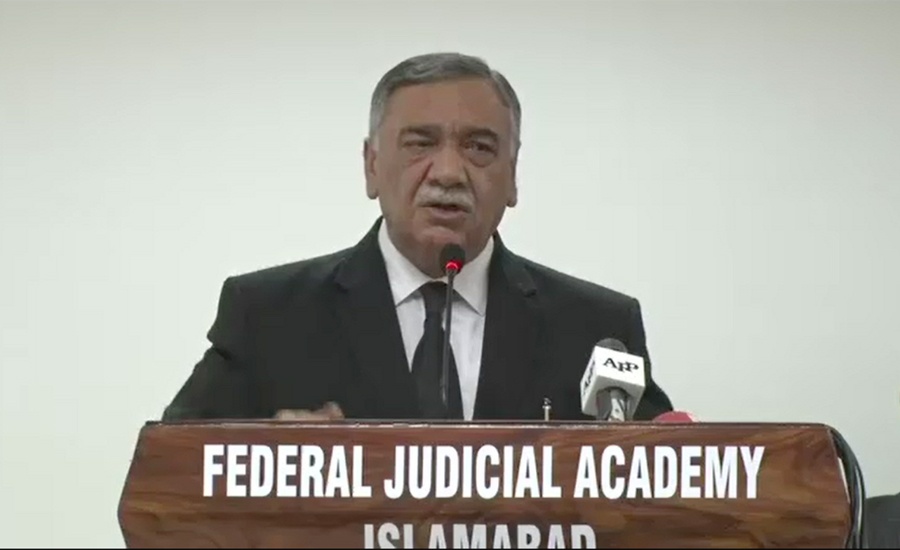 ISLAMABAD (92 News) – Chief Justice of Pakistan Asif Saeed Khosa has called for launching a movement to restore the respect of lawyers. Addressing a ceremony at Judicial Academy on Monday, he said that lawyers’ respect is declining with each passing day. “Here lawyers throw chairs at judges. Layers should use the arguments instead of their hands. Will it be right if the lawyer and the judge beat each other? Where are we heading to? We should eliminate it immediately.” he pointed out. The CJP said that the lawyers could not get the support of good words without their love for the literature. “A good lawyer should have full command of the history, mathematics and the literature,” he said. He said that sometime judges are asking the lawyers that the case cannot be instituted. “The judge should write the judgment after listening to arguments.” Chief Justice Asif Saeed Khosa said that lawyers could win the case only on the basis of arguments.

Addressing a ceremony with regard to reforms in the police in Karachi on July 19, Chief Justice of Pakistan Asif Saeed Khosa said that the false testimony will not be acceptable any more. He said that false testimony and delaying tactics are two main faults in the criminal justice system. “Courts are forced to rely on the investigation officers,” he said. He said that three steps have been taken to overcome the delaying tactics. “The cases will not be adjourned. All witnesses will be heard in a case. A model court will be established at the district level,” he announced. The CJP said that the witnesses of another case will not be recorded without deciding the first case. “It is responsibility of the state to collect the witnesses of a case.” He said that there was a need to further improve the investigation process. “We have to equip the police system with modern requirement,” he said. He was of the view often false witnesses are the relatives of the complainant. Chief Justice Asif Saeed Khosa said that there was no murder and narcotics case in 17 districts due to the model courts. “Independence of police is also mandatory like the independence of the judiciary,” he added. He said that the witness of a person telling a lie once is not acceptable. “We have to eliminate the false testimony if we want to establish a society based on justice,” he added. He announced that 9,767 cases of murder and narcotics have been decided in 86 days. Khosa said that the first e-court system had been introduced in Pakistan.