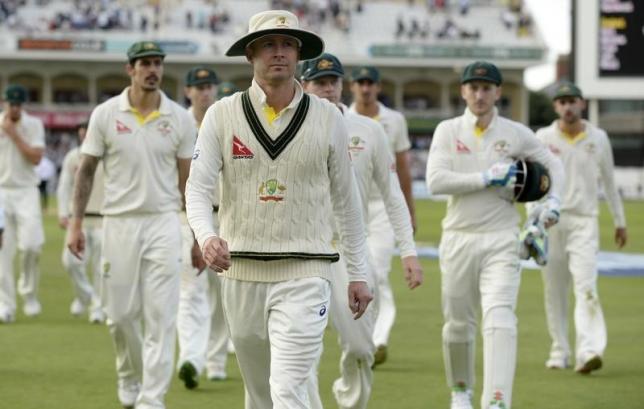 SYDNEY - Retiring Australia captain Michael Clarke has rubbished local media reports that internal divisions within the squad were responsible for the Ashes debacle. Clarke, who has decided to bring an end to his career after this week's fifth test at the Oval, launched an expletive-laden broadside at allegations in an article in Brisbane's Courier-Mail newspaper on Monday. The report said Clarke had travelled by separate transport and refused to socialise with other players, that a feud between the wives of two senior players had destabilised the squad, and that the dropping of Brad Haddin had caused serious disquiet. "I can guarantee you, the feeling in this group is exceptional," Clarke told Australia's Triple M radio. "There is no disharmony is this group whatsoever. The players are as tight as any team I've been a part of." Australia relinquished the Ashes after defeat by an innings and 78 runs at Trent Bridge on Saturday, going 3-1 down in the five-test series. Clarke was particularly dismissive of the claim the presence of players' wives and girlfriends had been a distraction. "That's absolute garbage," he said. "I'll give back 10 of my test 100s if it wasn't for my beautiful wife. I'd be half the player I was without her." Clarke said the dropping of Haddin for the second test after the wicketkeeper had missed the first test to be with his sick daughter had been difficult, but accepted it had been done for cricketing reasons. 'KEEP THE FAITH' His prevailing sentiment, though, had been disappointment at his own performances with the bat during the series. "I've always prided myself on leading from the front as captain and making sure I'm contributing to success by making runs," he added. "It's heartbreaking to have played the way I've played and not helped the team get over the line. The retirement is at the right time for me and the team." Clarke also accepted that the death of his friend Phillip Hughes at the end of last year had affected him more than he expected. "The part I didn't expect was how hard it hit me personally, there's no doubt I miss him every day," he said. "It still affects me personally but as an Australian sportsman, you need to be leading from the front and still performing and unfortunately I haven't been able to do that." The 34-year-old, who will be replaced as captain by Steve Smith, called on his compatriots to continue to back the Australia side through the rebuilding job ahead. "There's going to be some tough times but I think the talent we have in the Australian sporting community is like no other," he said. "I think that we need to stick together and keep the faith." - Reuters