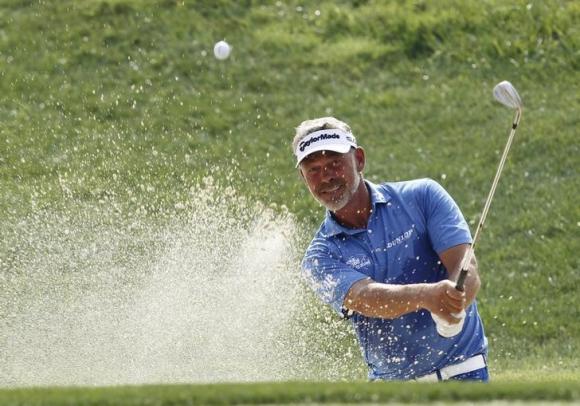 LONDON (Reuters) - It would be a major surprise if anyone but former British Open champion Darren Clarke was appointed Europe's new Ryder Cup captain on Wednesday. A five-man selection panel is due to make an announcement on Paul McGinley's successor after meeting at the European Tour's Wentworth headquarters on the outskirts of London. Clarke is one of three candidates for the 2016 role, along with Spain's Miguel Angel Jimenez and Thomas Bjorn of Denmark, and the Northern Irishman is the odds-on favorite with the bookmakers to land the coveted role. It seems almost inconceivable that McGinley, 2012 captain Jose Maria Olazabal, 2010 skipper Colin Montgomerie, tour chief executive George O'Grady and former Ryder Cup player David Howell will not opt for Clarke. The 46-year-old, who played in the biennial team event five times and was a vice-captain in 2010 and 2012, appears to have the backing of most of the team that beat the United States in Scotland in September including world number one Rory McIlroy. Four-times major winner McIlroy said last month that Clarke would be a perfect fit in the U.S. where he is a popular figure. The 2011 British Open champion has tasted defeat just once in the seven times he has been involved in the Ryder Cup, when the U.S. won at Brookline in 1999, and he appears to tick the right boxes in terms of experience and support from the players. Media reports have incorrectly suggested in recent days that only the three former captains will have a vote, with O'Grady and Howell stepping in if the trio cannot decide on their choice. The tour, however, has been at pains to point out that each member of the panel has an equal vote. The successful candidate is likely to be going head-to-head with Davis Love III at Hazeltine, Minnesota next year after the Golf Channel reported on Monday that the 1997 U.S. PGA Championship winner would be named American skipper next week. It would be the second time Love, 50, has led the team after he oversaw the "Miracle of Medinah" defeat in 2012 when Olazabal's side stormed back to win from 10-6 down.