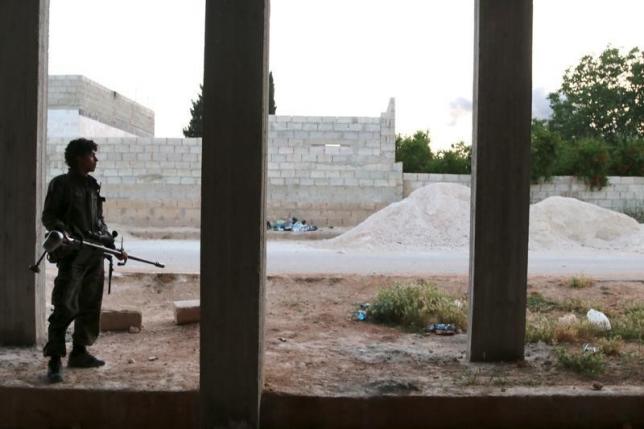 ALEPPO - Fighting between Islamic State (IS) and Syrian rebels near the Turkish border has killed dozens of people in the last two days, as IS militants keep up an offensive that has led to rapid territorial gains, a monitoring group said. Fighters from the militant group entered the rebel-held town of Marea early on Saturday, using at least two car bombs in the assault, and clashes continued later in the day, the British-based Syrian Observatory for Human Rights said. An advance by the jihadists on Friday that cut Marea off from another key insurgent-held town, Azaz, was their biggest territorial gain in the northern province of Aleppo for two years, the Observatory said. Islamic State has been battling rebel factions fighting under the banner of the Free Syrian Army (FSA) since late last year, but clashes have intensified in recent weeks. The fighting in the past two days has killed at least 27 civilians as well as 41 combatants, the Observatory said. A US-led coalition carried out air raids on IS positions in one of the villages that the jihadists had captured from rebels, it said. IS on Friday encroached from the east on a narrow area of rebel control connected to the Turkish border, through which the rebels have received support. To the west of that rebel-held area is territory under the control of the Kurdish YPG militia and its allies, who have been fighting the rebels but also separately battling Islamic State. One of the Kurdish-allied groups took over a village west of Marea on Saturday, apparently in a rare agreement with the FSA rebels, the Observatory reported. The move could bring the Kurdish-allied group, Jaysh al-Thuwwar, into confrontation with IS in the area. It also further erodes rebel control there from the west. The United States is backing the YPG and its allies in an offensive against IS in the northern countryside of neighbouring Raqqa province, which is home to the group's de facto capital, Raqqa city. Washington has also supported FSA factions. -Reuters