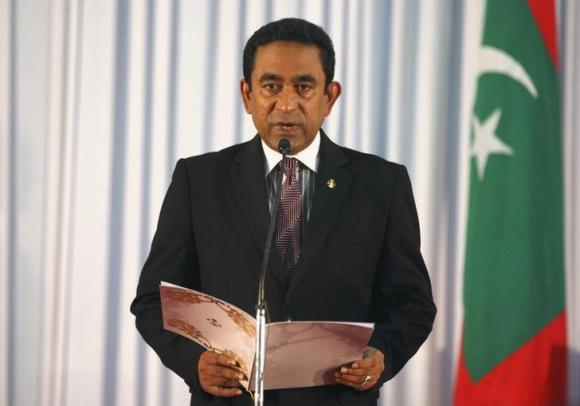 MALE/COLOMBO (Reuters) - Clashes broke out in the Maldives on Friday after thousands gathered to protest against the arrest of former president Mohamed Nasheed and demand that current leader Abdulla Yameen resign. Tensions have escalated on the cluster of tropical islands off southwest India since Nasheed was arrested last weekend on charges of terrorism relating to an incident when, as president, he ordered the arrest of a judge. Nasheed, who appeared in court on Monday, has said he was forced to resign at gunpoint over the judicial row in 2012, and allies say he was ousted in a coup. Supporters of Nasheed's Maldivian Democratic Party (MDP) and the Jumhooree Party, which has broken away from Yameen's ruling coalition, converged by boat from across the nation of 1,190 islands after a call to rally in the capital Male. A reporter at the scene estimated the crowd at 8,000 to 10,000 people. The entire population of the Maldives, a popular destination for sun-seeking tourists, is less than 400,000. Protesters waved green-and-red national flags and chanted a song whose words included a call to "stand in defence of the constitution". "The current government is illegitimate," one protester told Reuters. A spokesman for Nasheed's party said protesters were attacked by gangs wielding machetes and clubs in full view of police, who later arrested at least 33 protesters. Spokesman Hamid Abdul Ghafoor said President Yameen’s regime had "shown its thuggish side once more". Mohamed Hussain Shareef, a minister in Yameen's office, said police had found protesters carrying rods, machetes and knives. Demonstrators numbered "only a couple of thousand people at best", he said. "So far 33 have been arrested for confronting police, breaking the peace and related infringements," Shareef told Reuters. He said the only local journalists permitted by protesters at the scene were those from opposition media. Opposition sources told Reuters the protest was intended as a show of strength before a parliamentary session on March 3 at which the anti-Yameen alliance would try to initiate a process leading to the president's impeachment. Yameen, 55, won a November 2013 presidential poll whose second round was cancelled when early results put Nasheed ahead. Nasheed, the first popularly elected president of the Maldives, eventually lost by a narrow margin and conceded defeat. "A liberal and democratic constitution has fallen into the wrong hands," MDP spokesman Imthiyaz Fahmy told Reuters, adding that Yameen was taking the country into a "dark reign". "The people of the country will not let that happen. We will defend the constitution."