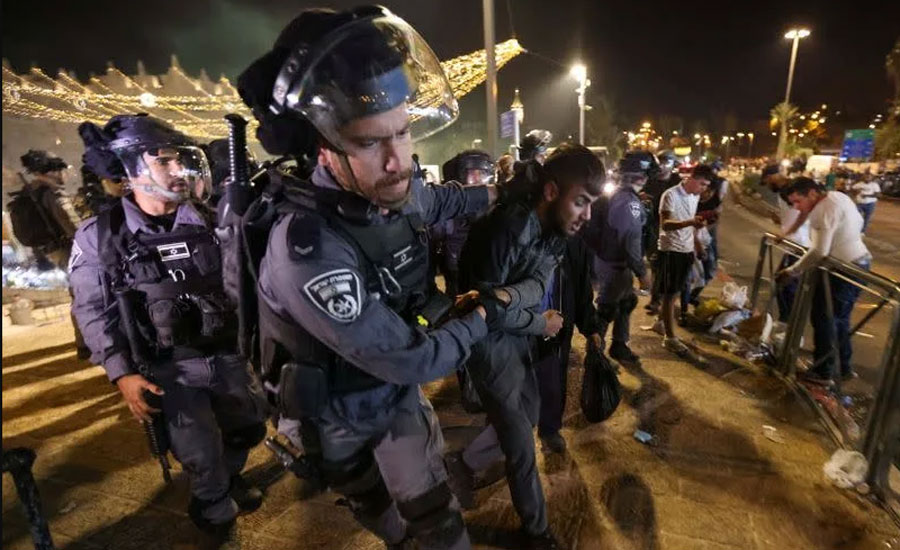 JERUSALEM (Reuters) - Clashes erupted between Palestinian protesters and Israeli police outside the Old City of Jerusalem on Saturday as tens of thousands of Muslim worshippers prayed at the nearby Al-Aqsa Mosque on Islam's holy night of Laylat al-Qadr.

Palestinian youth threw stones, lit fires and tore down police barricades in the streets leading to the walled Old City gates as officers on horseback and in riot gear used stun grenades and water cannons to repel them.

At least 80 people were injured, including minors and a one-year-old, and 14 were taken to hospital, the Palestine Red Crescent said. Israeli police said at least one officer was hurt.

"They do not want us to pray. There is a fight every day, every day there are clashes. Every day there are troubles," said Mahmoud al-Marbua, 27, speaking near the Old City's Damascus Gate. Pointing to police chasing youths and firing thunder-flashes at them, he added: "Look how they are firing at us. How can we live?"

Tensions have mounted in the city throughout the Muslim holy month of Ramadan, amid growing anger over the potential eviction of Palestinians from Jerusalem homes on land claimed by Jewish settlers.

In the Palestinian Gaza Strip, hundreds of protesters gathered along the border with Israel. The Israeli military said the crowds threw burning tyres and firecrackers toward the troops.

Gaza militants fired at least one rocket into Israel which landed in an open area, the military said.

"We salute the ppl. of Al-Aqsa, who oppose the arrogance of the Zionists & we call on our ppl. in Palestine to support their brothers by all means," Moussa Abu Marzouk, a leader of the armed Islamist group Hamas that rules Gaza, said on Twitter.

Israel said it was beefing up security forces on Saturday in anticipation of further confrontations in Jerusalem, the occupied West Bank and Gaza after fierce clashes erupted the previous night at Al-Aqsa Mosque.