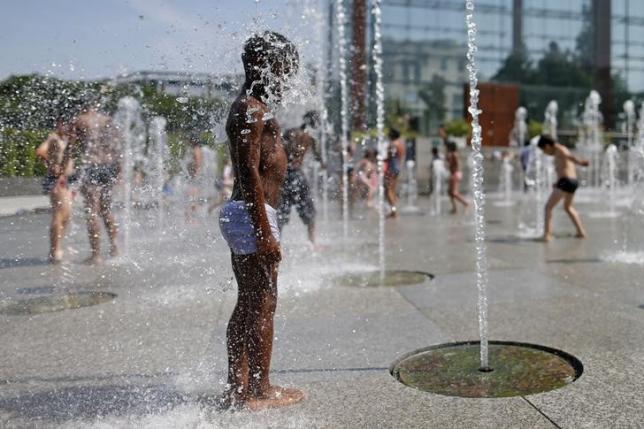 WASHINGTON - Climate change can be expected to boost the number of annual premature US deaths from heat waves in coming decades and to increase mental health problems from extreme weather like hurricanes and floods, a US study said. "I don't know that we've seen something like this before, where we have a force that has such a multitude of effects," Surgeon General Vivek Murthy told reporters at the White House about the study. "There's not one single source that we can target with climate change, there are multiple paths that we have to address." Heat waves were estimated to cause 670 to 1,300 US deaths annually in recent years. Premature US deaths from heat waves can be expected to rise more than 27,000 per year by 2100, from a 1990 baseline, one scenario in the study said. The rise outpaced projected decreases in deaths from extreme cold. Extreme heat can cause more forest fires and increase pollen counts and the resulting poor air quality threatens people with asthma and other lung conditions. The report said poor air quality will likely lead to hundreds of thousands of premature deaths, hospital visits, and acute respiratory illness each year by 2030. Climate change also threatens mental health, the study found. Post traumatic stress disorder, depression, and general anxiety can all result in places that suffer extreme weather linked to climate change, such as hurricanes and floods. More study needs to be done on assessing the risks to mental health, it said. Cases of mosquito and tick-borne diseases can also be expected to increase, though the study, completed over three years, did not look at whether locally-transmitted Zika virus cases would be more likely to hit the United States. President Barack Obama's administration has taken steps to cut carbon emissions by speeding a switch from coal and oil to cleaner energy sources. In February, the Supreme Court dealt a blow to the White House's climate ambitions by putting a hold Obama's plan to cut emissions from power plants. Administration officials say the plan is on safe legal footing. John Holdren, Obama's senior science adviser, said steps the world agreed to in Paris last year to curb emissions through 2030 can help fight the risks to health. "We will need a big encore after 2030 ... in order to avoid the bulk of the worst impacts described in this report," he said. -Reuters