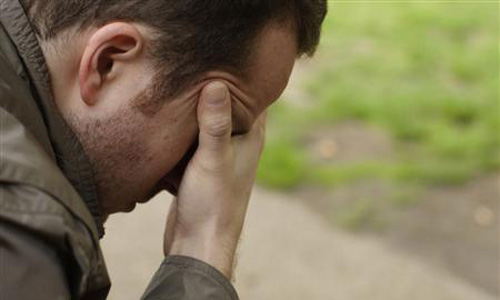 LONDON (Reuters) - People diagnosed with major depression are around three times more likely than the general population to commit violent crimes such as robbery, sexual offences and assault, psychiatric experts said on Wednesday. In a study based on some 47,000 people, the scientists emphasized, however, that the overwhelming majority of depressed people are neither violent nor criminal and should not be stigmatized. "One important finding was that the vast majority of depressed persons were not convicted of violent crimes, and that the rates ... are below those for schizophrenia and bipolar disorder, and considerably lower than for alcohol or drug abuse," said Seena Fazel, who led the study at Oxford University's psychiatry department. Depression is one of the most common forms of mental illness, affecting more than 350 million people worldwide. Treatment usually involves either medication or psychotherapy, or a combination of both. Andrea Cipriani, a clinical researcher and consultant psychiatrist at Oxford who was not directly involved in the study, said the results show how important it is to talk directly to depressed patients about how violent thoughts and behavior can be part of their illness. "It's relieving for patients to talk about what they feel. It's relieving to know there's a way out and it's treatable," he told reporters at a briefing. Fazel's team, whose work was published in The Lancet Psychiatry journal, tracked medical and crime records of 47,158 people in Sweden diagnosed with depression and compared them with 898,454 non-depressed people matched for age and gender. Following up for an average of three years, they found the depressed patients had a higher risk of both harm to others and self-harm. When they adjusted for other factors such as previous history of violence, self-harm, psychosis and substance misuse -- all of which increase the risk of violence -- they found a smaller but still increased risk of violent crime among depressed people. Fazel noted that in guidelines for doctors treating major depression, there is considerable focus on whether a patient is likely to self-harm or attempt suicide, yet little attention is given to violence. He said the next step in the research would be to examine the links between depression and violence. "Is it about not being able to think through things, not being able to make judgments about risk? Is it irritability? Impulsiveness?" he said. "If we can get more of a handle on that, it could really help treat these people."