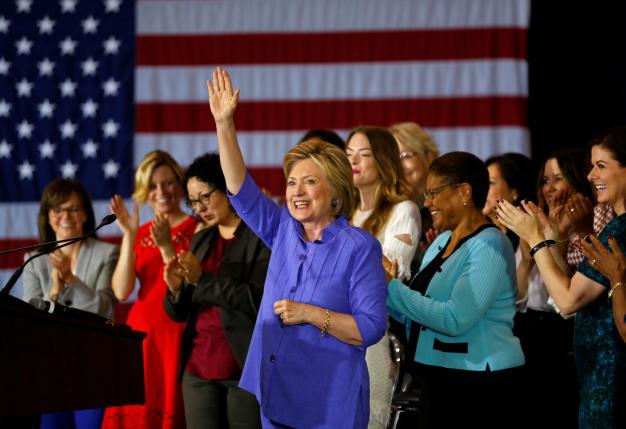 NEW YORK – Democratic presidential contender Hillary Clinton has opened up a double-digit lead over Republican rival Donald Trump, regaining ground after the New York billionaire briefly tied her last month, according to a Reuters/Ipsos poll released on Friday. The shift in support comes as Clinton steps up her attacks on the real estate mogul's policy positions, and as Trump fends off criticisms of his eponymous university and the pace at which he doled out money that he raised for U.S. veterans. Some 46 percent of likely voters said they supported Clinton, while 35 percent said they supported Trump, and another 19 percent said they would not support either, according to the survey of 1,421 people conducted between May 30 and June 3. Trump had briefly tied Clinton in support among likely U.S. voters in mid-May, raising expectations for a tight race between the two likely contenders in November's presidential election. Trump has all but sealed the Republican nod after a string of big wins in state nominating contests forced his party rivals to drop out, while Clinton is still fending off a long-shot bid for the Democratic spot on the ballot by U.S. Senator Bernie Sanders of Vermont. Clinton is hoping to seal the nomination next week, when a slew of big states including New Jersey and California will hold primaries, allowing her to consolidate her party's support ahead of a general election matchup against Trump. 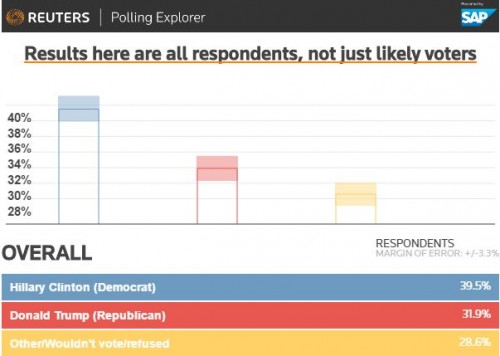 Clinton's polling surge comes as Trump is been harangued by criticisms over his Trump University, the target of a trio of lawsuits that claim it misled thousands of people who paid up to $35,000 for seminars to learn about Trump's investment strategies. Trump has defended the school and said he will relaunch it once the litigation ends. Trump this week also outlined the recipients of millions of dollars in donations he raised at an event in January for veterans' groups, in a bid to end speculation that he had not yet handed over all of the money. On Thursday, Clinton used a foreign policy speech in California to paint Trump's policy platform as "dangerously incoherent" and cast her Republican rival as both a frightening and laughable figure. Trump responded by saying she lied about his positions and by ripping her record as secretary of state, which he says was marred her handling of government emails and the death of a U.S. ambassador in Libya. –Reuters