Clinton, as polls tighten, shifts focus to herself instead of Trump 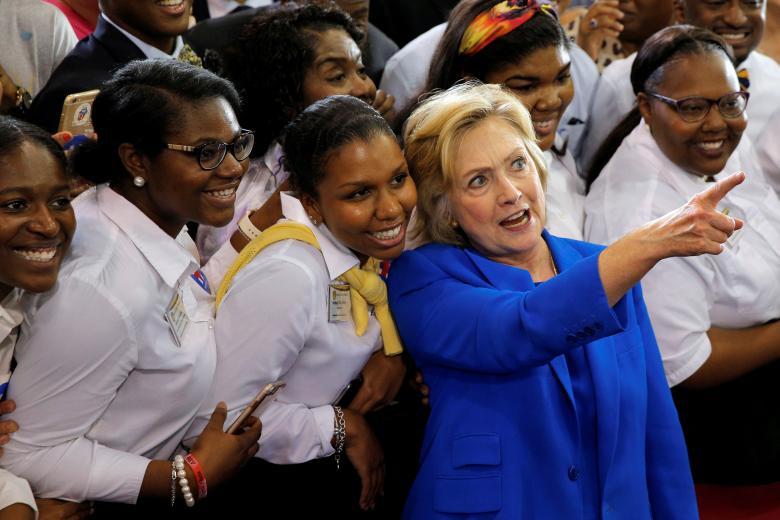 Clinton, as polls tighten, shifts focus to herself instead of Trump

KANSAS CITY - US Democratic presidential nominee Hillary Clinton reflected on her religious faith during the first of a series of speeches her campaign said would focus on her values and vision rather than those of Republican opponent Donald Trump. The shift comes as opinion polls tighten between Clinton, the former secretary of state and US senator, and Trump, a New York businessman, ahead of the Nov. 8 election. Clinton has focussed many of her public remarks on criticism of Trump, including his provocative comments on illegal immigrants, Muslims and women. Trump has criticized Clinton's record in public office and questioned her honesty and qualifications for the White House. But the Clinton campaign acknowledged she had to spend more time focussing her remarks on herself so voters could see the "aspirational" vision she hopes to enact if she becomes the first woman elected US president. "We believe we have to work extra hard to make sure that the positive notion of what she wants to do breaks through given the amount of interest that there is (in Trump) and what he says and also in what we say about him," Clinton's communications director, Jennifer Palmieri, told reporters on her plane. Clinton will do that with speeches on the economy, children and families, and national service in the coming weeks. She started on Thursday night with an address to the National Baptist Convention, made up primarily of African-Americans, that focussed on her own religious life. Clinton spoke of teaching the occasional Sunday school class and being married for more than 40 years to former President Bill Clinton, a Southern Baptist, despite being a lifelong Methodist herself. She told the crowd about her gruff Navy father praying by his bed every night and her mother, who experienced love during a tough childhood that grounded her faith. Reflecting on her Christianity, Clinton said Jesus Christ's greatest command was to love. "We're not asked to love each other. Not urged or requested. We are commanded," she said. "Some days it's really hard for me," she said to laughter. Clinton does not speak frequently about her faith, although she discussed its importance to her in a televised town hall event in February during her battle with US Senator Bernie Sanders for the Democratic presidential nomination. Her words on Thursday seemed to connect with members of the mostly black audience, who applauded and raised their hands in affirmation of many of her comments. Clinton polls strongly among black voters. "I've learned to be grateful not just for my blessings but also for my faults, and there are plenty," she said, noting the importance of humility among leaders. -Reuters