Clinton seeks to keep Trump on defensive after US presidential debate 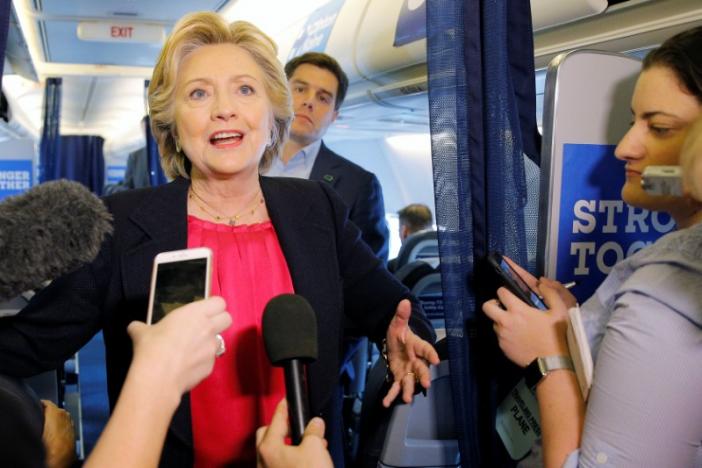 Clinton seeks to keep Trump on defensive after US presidential debate

RALEIGH - Democrat Hillary Clinton sought to keep Republican rival Donald Trump on the defensive a day after their first US presidential debate with accusations he is a sexist, racist and tax dodger, while Trump suggested he would "hit her harder" next time by bringing up her husband's infidelity. While the New York real estate mogul found himself in another controversy over his fresh insults about the weight of a former beauty pageant winner, Clinton tried to keep up the momentum after her forceful debate performance. She told reporters that during the debate, Trump "was making charges and claims that were demonstrably untrue, offering opinions that I think a lot of people would find offensive and off-putting." For his part, Trump, speaking at a rally in the battleground state of Florida on Tuesday, said of the debate: "On issue after issue, Secretary Clinton defended the terrible status quo – while I laid out our plan to bring jobs, security and prosperity back to the American people." Monday night's face-off between Clinton, with decades of experience in public life, and Trump, famous as a television personality but running for office for the first time, attracted a record audience for a US presidential debate. Nielsen data showed 84 million people watched the debate on US television, topping the 80.6 million viewers for the Jimmy Carter-Ronald Reagan TV presidential debate in 1980. Trump praised himself for not attacking Clinton during the debate about the marital infidelity of her husband, former President Bill Clinton, but said he may take up the attack line going forward. There are two more debates scheduled, on Oct. 9 in St. Louis and Oct. 19 in Las Vegas, ahead of the Nov. 8 election. "I may hit her harder in certain ways. I really eased up because I didn't want to hurt anybody's feelings," Trump said in an interview on the Fox News programme "Fox & Friends." He added that when Clinton criticized him for his treatment of women, he held back, saying: "I was going to hit her with her husband's women. And I decided I shouldn't do it because her daughter was in the room." Clinton brushed off Trump's vow, saying: "He can run his campaign however he chooses." She added that "the real point is about temperament and fitness and qualification to hold the most important, hardest job in the world." Trump himself was still married to his first wife, Ivana Trump, when he had a high-profile affair with Marla Maples, who became his second wife. He eventually divorced Maples and married his third and current wife, Melania Trump. In the interview with Fox News, Trump sought to deflect criticism of his debate performance, saying the debate moderator, Lester Holt of NBC News, asked him "very unfair questions" and that he was given a "very bad" microphone. "I don't want to believe in conspiracy theories, of course, but it was much lower than hers and it was crackling," Trump said of the microphone. Clinton, speaking to reporters on her campaign plane, said: "Anyone who complains about the microphone is not having a good night." BEAUTY QUEEN Clinton, 68, excoriated Trump, 70, during the debate at Hofstra University in Hempstead, New York, for having called women "pigs, slobs and dogs." But Trump levelled new and highly personal criticism on Tuesday toward Venezuelan-born beauty queen Alicia Machado, who won the 1996 Miss Universe title and is now a US citizen. "She was the winner and she gained a massive amount of weight," said Trump, the former owner of the Miss Universe pageants. "And it was a real problem. We had a real problem. Not only that - her attitude - and we had a real problem with her." Clinton, the first woman to win the presidential nomination of a major US political party, seemed to pique Trump when she brought up during the debate how Trump had insulted women, mentioning Machado by name. Clinton said Trump called her "Miss Piggy" and also "Miss Housekeeping" because she was a Latina. 'GAMING THE SYSTEM' Clinton, a former US senator and secretary of state, stepped up her criticism of Trump for refusing to release his tax returns, as presidential candidates have done for decades, and for saying during the debate that not paying federal income tax "makes me smart." "He actually bragged about gaming the system to get out of paying his fair share of taxes. In fact, I think there's a strong probability he hasn't paid federal taxes a lot of years," she said at a campaign rally in Raleigh, North Carolina, a pivotal state in the election. "He probably hasn't paid a penny to support our troops or our vets or our schools or our healthcare system." Trump held a campaign event in Miami's Little Havana, aiming to shore up support among Hispanic voters. His campaign said on Tuesday it had raised more than $18 million since the debate. Trump earlier complained that issues from Clinton's 2009-2013 tenure as secretary of state were not addressed on Monday night, including topics such as her use of a private computer server for government emails, the deadly attack in Benghazi, Libya, and the Clinton Foundation charity. In one of their more heated exchanges, Clinton accused Trump of promulgating a "racist lie" by questioning the citizenship of Barack Obama, the first black US president, saying he was not born in the United States. Obama lent his support again to Clinton's bid to become his successor, tweeting on Tuesday: "Couldn't be more proud of @HillaryClinton. Her vision and command during last night's debate showed that she's ready to be our next @POTUS." The Washington Post, citing a Clinton campaign source, reported she would be endorsed by John Warner, a former Republican US senator from Virginia and Navy secretary, who the newspaper said would appear at an event in Virginia on Wednesday with Clinton's running mate, Tim Kaine. The Arizona Republic's editorial board also endorsed Clinton, the first time in the newspaper's 126-year history it has backed a Democrat for president. -Reuters