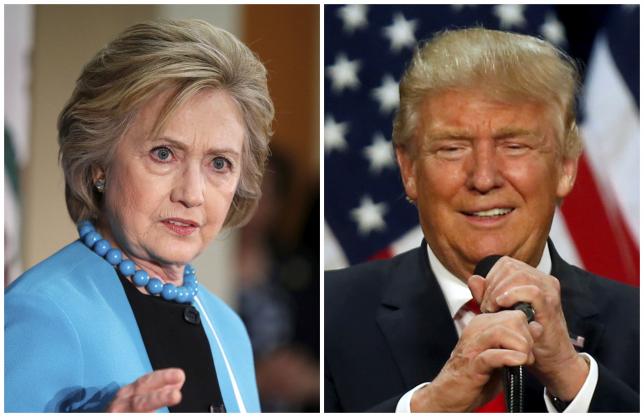 WASHINGTON - Democratic presidential front-runner Hillary Clinton will slam Republican Donald Trump for being too friendly with North Korea and too harsh on European allies during a foreign policy speech in California on Thursday, designed to paint the billionaire businessman as unfit for the White House. The speech in San Diego comes as the former secretary of state seeks to shift her attention to the Nov. 8 presidential election against likely rival Trump, and away from Bernie Sanders, the US senator from Vermont who is continuing his long-shot bid for the Democratic nomination. Trump has said he would sit down with North Korean leader Kim Jong Un to try to stop Pyongyang's nuclear programme and has criticised the decades-old NATO alliance with mainly European nations as obsolete and too costly for the United States. "It’s important that people understand this is not just about Republican versus Democrat, that Trump is unlike any presidential candidate we have seen and he is fundamentally unfit to be our commander in chief," Clinton aide Jake Sullivan said in an interview ahead of Clinton's speech. California, the most populous US state, is among six states that are to hold Democratic nominating contests next Tuesday. Clinton already has a nearly insurmountable lead over Sanders in the delegate count, but is hoping a decisive win in California can help her clinch the party nomination early and quell concerns about divisions in the party ahead of the general election against Trump. Clinton has already delivered several speeches on foreign policy and national security. Her address in San Diego will not break new policy ground, but will mainly respond to Trump’s recent comments, her campaign said. Clinton will argue that Trump’s statement that he was prepared to talk to Kim Jong Un, made in a Reuters interview last month, has only emboldened him and invited him to be more provocative, Sullivan said. A column this week in DPRK Today, one of North Korea’s state mouthpieces, described Trump as a “wise politician” and Clinton as “thick-headed Hillary." “Donald Trump’s statements about North Korea show that he has more interest in making Kim Jong Un like him than backing up our friends and allies in the region,” Sullivan said, noting that South Korea has worked with the United States on missile defence. Trump's remarks on the decades-old NATO alliance of 28 nations will also elicit a response from Clinton, Sullivan said. The New York businessman has said that member nations should pay for their own defence to ease the US burden and that the alliance itself needs reconfiguring. Sullivan, who worked with Clinton at the US State Department, said burden-sharing is “not a novel point” within NATO and that Clinton will highlight her record of getting allies to “step up” and share defence costs. Clinton, however, would not walk away from the alliance, which coordinates with the United States on counter-terrorism, nuclear proliferation and other issues, Sullivan said. In addition to California, states holding nominating contests on June 7 are Montana, New Jersey, New Mexico, North Dakota and South Dakota. California Governor Jerry Brown this week endorsed Clinton in the Democratic contest, saying she was the “only path forward” to “stop the dangerous candidacy of Donald Trump.” -Reuters