Clinton and Trump race for support on eve of US election 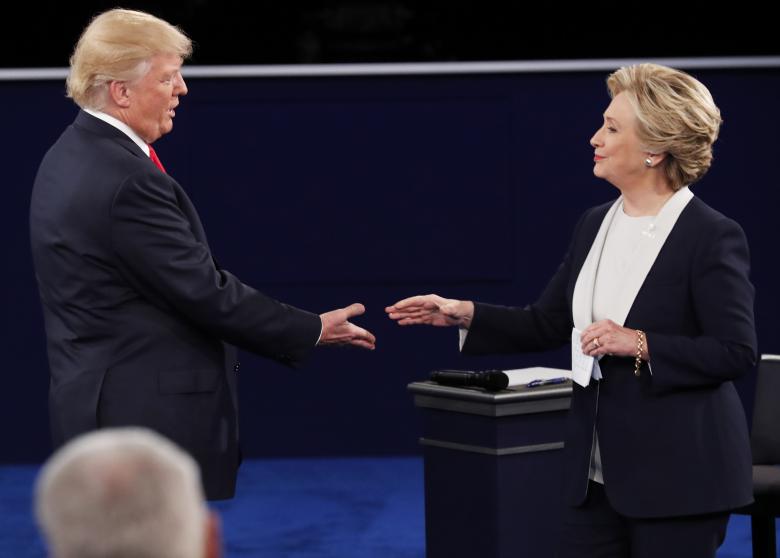 Clinton and Trump race for support on eve of US election

PITTSBURGH/SARASOTA – Democrat Hillary Clinton and Republican Donald Trump crisscrossed the country on Monday as they raced to sway undecided voters in a tight US presidential race that has Clinton with a narrow lead according to opinion polls.
With only one day left before Election Day, the Clinton campaign was boosted by Sunday's unexpected FBI announcement that it stood by its July decision not to press any criminal charges in an investigation of Clinton's email practices. A Fox News opinion poll on Monday had former Secretary of State Clinton leading Trump, a wealthy New York real estate developer, by four percentage points among likely voters. Financial markets brightened on Monday in reaction to the latest twists in what has been a roller-coaster presidential campaign. Stocks and the dollar posted their biggest gains in weeks after Sunday's FBI announcement. In early trading, the Dow Jones Industrial Average was up 243 points, or 1.36 percent, at 18,131.33. Opinion polls show a close race, but tilting toward Clinton. Major bookmakers and online exchanges were more confident than public opinion polling that Clinton will win Tuesday's election. Predictit put Clinton's chances of capturing the White House at 81 percent. Both Clinton and Trump will spend the day racing across a handful of battleground states that could swing the election, given the Electoral College system that awards the White House on the basis of state-by-state wins. Trump was scheduled to hold his first campaign appearance of the day in Sarasota, Florida, where he and Clinton have been locked in a tough battle in a state with a large Hispanic-American voting population. He was also heading to North Carolina, Pennsylvania, New Hampshire and Michigan, closing with a late-night rally in Grand Rapids, Michigan. COMEY SURPRISE FBI Director James Comey again sent shockwaves through the race by telling Congress on Sunday that investigators had worked around the clock to complete a review of newly discovered emails and found no reason to change their July finding that there was no criminal wrongdoing in Clinton's use of a private email server, rather than a government system, while she was secretary of state from 2009-2013. It was uncertain whether the announcement came in time to change voters' minds or undo any damage from days of Republican attacks on Clinton as corrupt. Tens of millions of Americans had cast early votes in the 10 days since Comey first told Congress of the newly discovered emails. "Nothing's going to change between today and tomorrow to help [Clinton] win back" undecided voters," Trump campaign manager Kellyanne Conway said on ABC's "Good Morning America." Trump, who drew wide criticism last month when he said the election was rigged against him and that he would not yet commit to respecting the outcome, questioned the thoroughness of the FBI review and said the issue would not go away. Clinton did not mention the FBI finding during her last two campaign events on Sunday. "That's behind us now," campaign manager Robby Mook told CNN on Monday. Clinton was to make two stops in Pennsylvania and visit Michigan on Monday before wrapping up with a midnight rally in Raleigh, North Carolina. She was to appear at an evening rally at Philadelphia's Independence Hall with President Barack Obama and first lady Michelle Obama, as well as rock star Bruce Springsteen. Clinton, speaking briefly to reporters before boarding her campaign plane in Pittsburgh, pressed her commitment to bringing the country together. "I think that these splits, these divides that have been not only exposed but exacerbated by the campaign on the other side are ones that we really do have to ... bring the country together,” Clinton said. Asked if she would be able to heal the country after such a divisive election season, Clinton said, "Absolutely." Markets have tended to see Clinton as the status quo candidate, with more uncertainty over Trump, and news favoring her bid often boosts investors' risk appetite. Global financial markets slipped last week as opinion polls showed the presidential race tightening. News of the renewed FBI investigation had appeared to fuel a slide in Clinton's poll numbers since late October. The latest Reuters/Ipsos poll showed Clinton with a 5 percentage point lead over the New York businessman nationally - 44 percent to 39 percent support - while races in the swing states of Florida and North Carolina shifted from favoring Clinton to being too close to call. Clinton held a 4-point lead in the ABC/Washington Post poll and a CBS news poll released on Monday. –Reuters