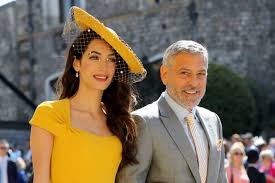 WASHINGTON (Reuters) - A justice foundation created by George and Amal Clooney is set to announce on Wednesday a global initiative called TrialWatch to monitor court trials where there is a risk of abuse and to rank countries’ judicial systems. Working with the Columbia University Law School and the American Bar Association, the TrialWatch initiative will train an international network of court monitors, including non-lawyers, whose reports will be used by legal experts to grade trials according to international standards, several lawyers and academics involved with TrialWatch said. “Today, courts all over the world are used as tools of oppression. Governments get away too easily with imprisoning opposition figures, silencing critics and persecuting vulnerable groups through the courts. Trial monitoring will shine a light on these abuses,” Amal Clooney said in a statement. Amal Clooney, who married the Oscar-winning actor George Clooney in 2014, is an international law and human rights lawyer who has been a visiting professor at Columbia University Law School since 2015. She and her husband launched the Clooney Foundation for Justice, which focuses on promoting justice in courtrooms and elsewhere, in 2016. Her high profile cases have included representing Wikileaks founder, Julian Assange, and the former Prime Minister of Ukraine, Yulia Tymoshenko, as well as the country of Armenia in its fight for recognition of the Armenian genocide. She currently is a member of the legal team representing Reuters journalists Wa Lone and Kyaw Soe Oo, who were detained last year by Myanmar authorities while investigating the killing of 10 men and boys of the Rohingya minority during a military crackdown. The pair was convicted on Sept. 3 under the colonial-era Official Secrets Act and sentenced to seven years. Sarah Cleveland, faculty director of Columbia University Law School’s Human Rights Institute, said that while many organizations monitor high-profile trials, TrialWatch also will scrutinize lesser-known cases. The aim is “to expand global capacity so that we can reach trials that don’t involve the deposed head of state,” said Cleveland, who teaches a human rights course with Amal Clooney.