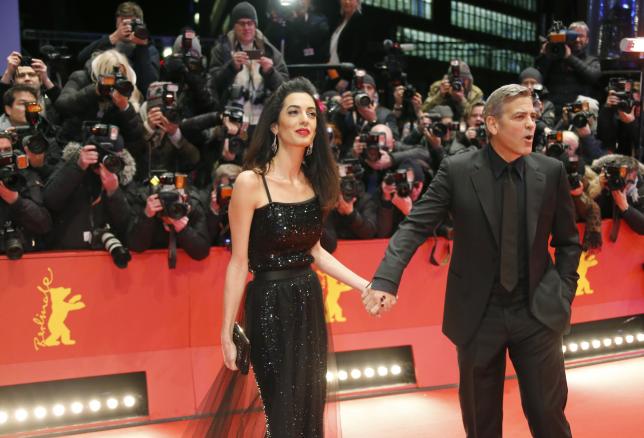 BERLIN – George Clooney said on Friday the refugee crisis is bigger than the headline-grabbing exodus from Syria and Iraq, and he believes Americans "will do the right thing" by rejecting Donald Trump and calls to ban Muslims entering the United States.

Clooney spoke to Reuters on the same day he and his wife, the human rights lawyer Amal Alamuddin Clooney, met German Chancellor Angela Merkel behind closed doors at the chancellery to discuss the refugee issue.

The Clooneys were in the German capital for the international premiere of "Hail, Caesar!", in which Clooney has a starring role and which opened the Berlin International Film Festival on Thursday.

"For me the refugee crisis is not just the Syrian refugees," Clooney told Reuters.

"You know there's still IDPs (internally displaced people) and refugees in South Sudan, in Darfur, that’s still millions of people and they are still dying.

"So it's really all over the world – 60 million displaced people right now in the world – it's just a terrible, terrible time for it," he added.

Clooney, who was challenged at a press conference on Thursday by questioners who urged him to use his public prominence to do more to help end the refugee crisis, said he is not afraid to speak out on controversial subjects.

Asked about Trump, who has called for banning Muslims and building a border wall to block illegal Mexican immigrants, Clooney said he thought Americans would eventually do the right thing.

"I always have to caution people when they watch American politics. We go a little crazy during the political season and it’s a very long season," Clooney said, adding:

"I think it was Winston Churchill said, ‘You can always count on Americans to do the right thing -- after they have exhausted every other possibility’. So you know it's all going to be fine it’s just going to take us a minute."

Josh Brolin, Clooney's co-star in "Hail, Caesar!", said he thought that while Trump's ideas may appeal to people who want a quick fix, he did not think they were realistic.

"There is something about the American psyche that defined us as anybody can do anything – isn't that the whole American definition, is anybody can become anything?

"That's what we prided ourselves on but at the same time – 'anybody can do anything' – that's also, you look at it, and it's like this is a scary prospect." –Reuters