LAHORE (92 News) - Punjab Chief Minister Shahbaz Sharif on Friday took notice of the news broadcast on 92 News regarding wrong map of Punjab and KPK published in the grade eight Geography book by the Punjab Textbook Board (PTB). As per details, opposition parties in the Punjab Assembly made the government target of severe criticism and slogan-chanting over the incident. The Punjab CM took notice of the gross error ordering Punjab Education Minister Rana Mashood to present to him a report on this matter. Subsequently, the minister has ordered an inquiry into the matter. Earlier, 92 News broke the news when PTB, without any no-objection certificate (NOC) and approval for its publication, published a Geography textbook for grade eight showing a Seraikistan province in Punjab and a Hazara province in Khyber Pakhtunkhwa. 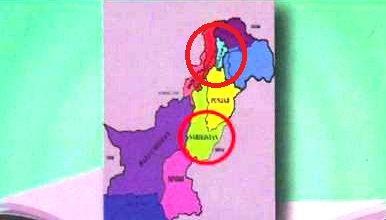