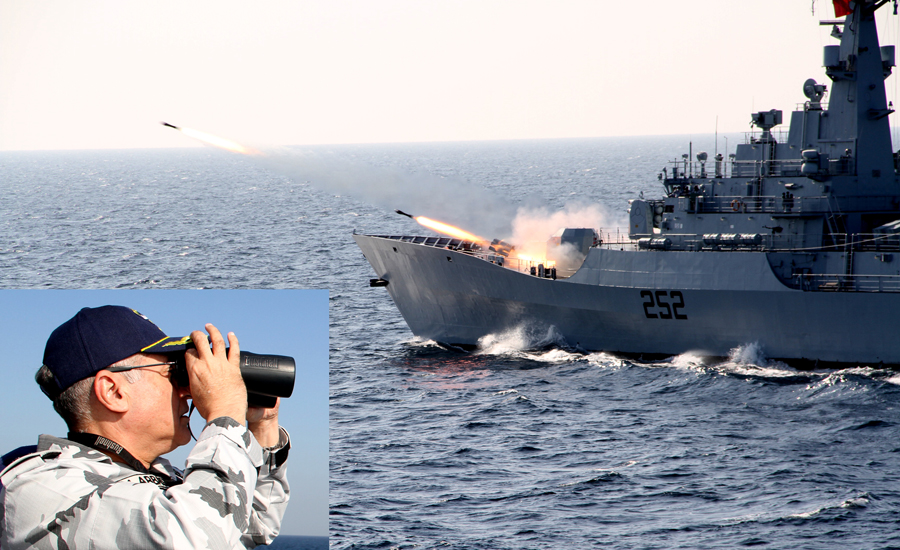 KARACHI (92 News) – Chief of the Naval Staff Admiral Zafar Mehmood Abbasi witnessed an impressive operational demo by combat units of Pakistan Navy in the North Arabian Sea on Monday. The Admiral was on his first visit to the Naval Fleet Units deployed at sea since assuming Command of Pakistan Navy. Commander Pakistan Fleet, Rear Admiral Mohammad Amjad Khan Niazi also accompanied him during the visit. Various PN Ships and Aircraft participated in this impressive operational demonstration. Admiral Zafar Mehmood Abbasi also interacted with the officers and men onboard PN ships and complemented them for their commitment to defend the motherland. The Admiral lauded high operational readiness of the fleet units and urged upon the officers and men to remain cognizant of the changing operational dictates to meet present and future challenges in the maritime domain. He emphasized on PN additional responsibilities in light of CPEC project and expressed PN’s resolve to keep the maritime environment safe for the sea farers. The CNS expressed his complete satisfaction over the operational readiness of PN Fleet and commended the efforts put in by all during his visit to Fleet Units at Sea. He reaffirmed the resolve of Pakistan Navy to ensure country's seaward defence and safeguard maritime interests of the nation at all costs.