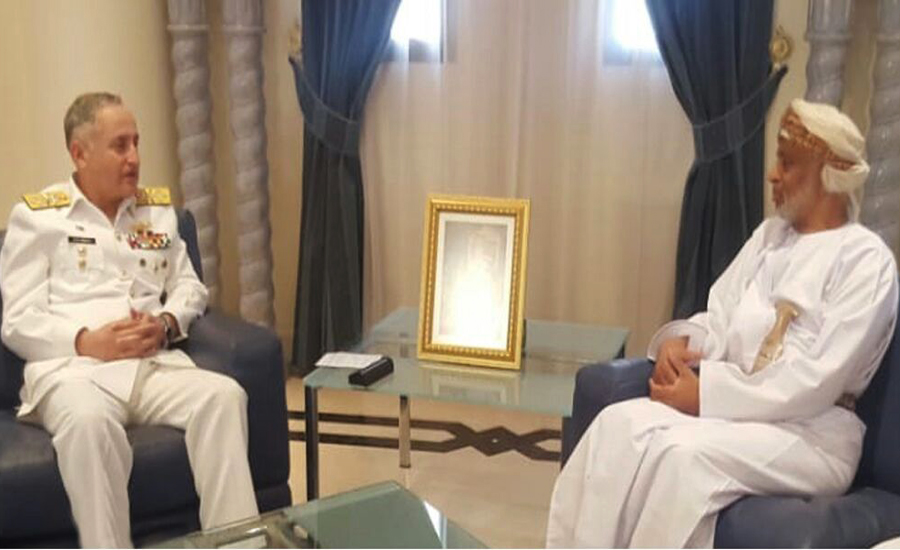 ISLAMABAD (92 News) – Chief of the Naval Staff Admiral Zafar Mahmood Abbasi, who is on an official visit to Oman, called on Secretary General of Ministry of Defence Oman, Mohamed Bin Naseer AL-Rasby and Chief of Staff Sultan’s Armed Forces Lt General Ahmed Bin Harith Al Nabhani in separate meetings. During the meetings, various avenues of defence collaboration between the two countries were dilated upon. Admiral Zafar Mahmood Abbasi highlighted, Pakistan’s commitment and performance in fight against terrorism, including Pakistan Navy’s contribution towards regional maritime security through a collaborative approach and expressed, existing cordial relationship between two countries be translated into further constructive engagements between Armed Forces of the two countries in general and the Navies in particular to promote peace and prosperity in the Indian Ocean Region. Omani dignitaries thanked Chief of the Naval Staff on Pakistan’s support to Oman in diverse defence related realms and appreciated role and contributions of Pakistan Navy in maintaining peace and stability in the region. 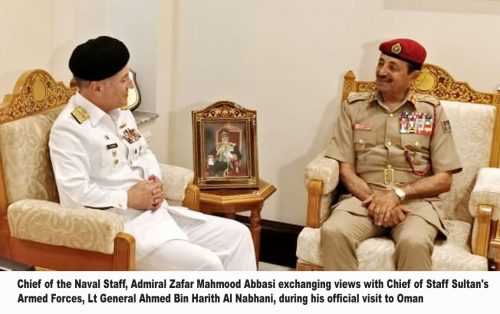 Pakistan and Oman enjoy cordial relations characterized by common and shared bonds of culture, traditions, religious and social values. The collaboration between PN and Royal Navy of Oman has strengthened over the years marked by conduct of joint naval exercise Thammar Al Tayyib, training exchange, port calls and visits. It is expected that recent visit of the Naval Chief will enhance and expand collaboration between the two countries in general and navies in particular.