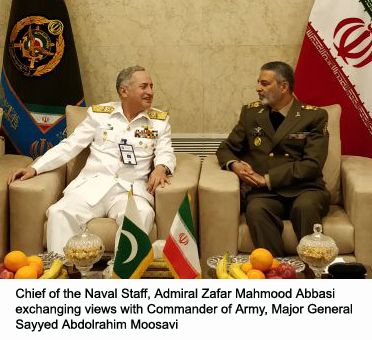 Admiral Zafar Mahmood Abbasi also briefed the participants on 'Maritime Perspective of Pakistan' with special focus on PN contributions to regional maritime security and opportunities offered by CPEC to the region. During the brief, he also highlighted the challenges to Indian Ocean security and emphasized on collaboration between the regional navies to enhance maritime security of the region. He also stressed upon greater collaboration between Indian Ocean countries to exploit potentials of blue economy. Indian Ocean Naval Symposium (IONS) is an initiative to formalize a regional maritime collaborative forum. Pakistan formally became member of IONS in Conclave of Chief attended by CNS held in Australia in Mar 14. Presently there are 23 member nations and nine observer nations. PN proactively participates in IONS as it provides a platform to the participating nations to work together for the good of global common. Participation of the Naval Chief in the IONS CoC-18 reflects Pakistan's commitment for regional peace and is a manifestation of PN contribution towards regional maritime security through a collaborative approach.