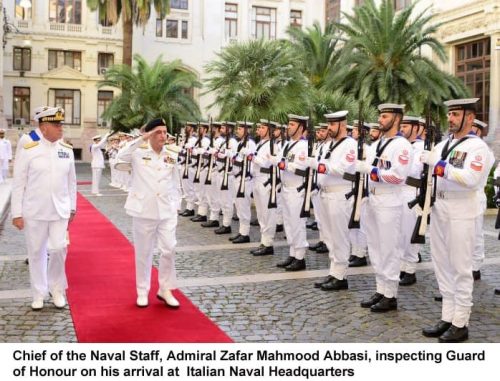 Various avenues of cooperation between the two Navies were also discussed. Chief of the Naval Staff Admiral Zafar Mahmood Abbasi highlighted Pakistan’s commitment and contributions in fight against terrorism, including initiation of Regional Maritime Security Patrols (RMSP) against piracy and maritime terrorism. Admiral Valter Girardelli lauded the role and contributions of Pakistan Navy in maintaining peace and stability in the region. The call was followed by a brief given to Admiral Zafar Mahmood Abbasi on Italian Navy’s operational regime and perspective on regional issues. Subsequently, Chief of the Naval Staff called on Commander-In-Chief Italian Naval Fleet Admiral Donato Marzano. During discussions, matters of mutual interest, including maritime security and stability, counter piracy operations, drug trafficking and various avenues to enhance interoperability between Pakistan and Italian Navy were pondered upon.

The CNS also visited Staff College of Italian Navy at Venice and delivered a lecture to the student officers besides interacting with faculty and staff. During the lecture, Admiral Zafar Mahmood Abbasi apprised the participants regarding geo-strategic situation of the Indian Ocean Region and role of Pakistan for development of regional peace and security. Earlier, the Naval Chief met Ambassador of Pakistan to Italy Nadeem Riyaz. It is expected that the visit of the Naval Chief will further enhance and expand defence ties between the two countries in general and Navies in particular.