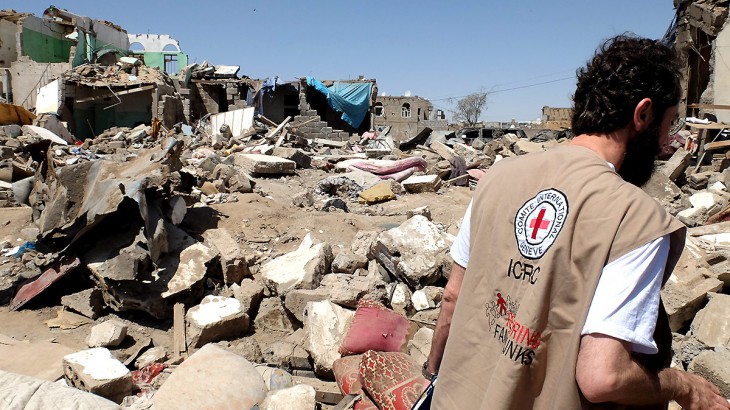 GENEVA - Members of the Saudi-led coalition conducting air strikes in Yemen are preventing a Red Cross plane from delivering medical supplies in Sanaa, an ICRC spokeswoman said on Tuesday. In a statement, the independent aid agency "called for the urgent removal of obstacles to the delivery to Yemen of vital medical supplies needed to treat casualties from a week of deadly clashes and air strikes". "We still don't have the permission from coalition members," ICRC spokeswoman Sitara Jabeen told Reuters in Geneva, declining to specify which coalition authorities were responsible for the hold-up. The aircraft, carrying enough medical supplies to treat from 700 to 1,000 wounded, is still in Djibouti, she said. It is due to fly to Amman, Jordan to load supplies from an ICRC warehouse before flying to Sanaa, once guarantees are received. "So far efforts to negotiate the safe arrival of the plane have not been successful," the statement said, adding that supplies for treating the war wounded are running low at hospitals across Yemen. For six days, a Saudi-led coalition has bombed Iran-allied Houthi fighters and army units fighting against President Abd-Rabbu Mansour Hadi, whose last bastion in the southern city of Aden was heavily shelled overnight. "An ICRC surgical team is due to arrive shortly in the southern city of Aden, where casualty numbers have been greatest," the ICRC said. - Reuters