The army chief was given detailed briefing on operational preparedness, ongoing internal security operations and other aspects of corps functioning.

The COAS expressed his satisfaction on operational preparedness of the corps for conventional war and their performance in ongoing internal security operations. He said that experience of war against terrorism has made our Army battle-hardened which makes our soldiers better prepared for conventional war.

The COAS apprised the garrison officers about the security environment and cardinals of Operation Raddul Fasaad. He said that the operation will bring lasting peace and stability in our country.

He praised exemplary performance of young officers and sacrifices rendered by them during the security operations. He said that young officers are his pride and nation also owes peace and stability to their patriotic devotion.

Addressing the soldiers, the COAS acknowledged their role in ongoing security operations and said that they are the real strength of the army. COAS Bajwa apprised them about various welfare measures being undertaken at Army level for them and their families, including health care, education and quality of life. 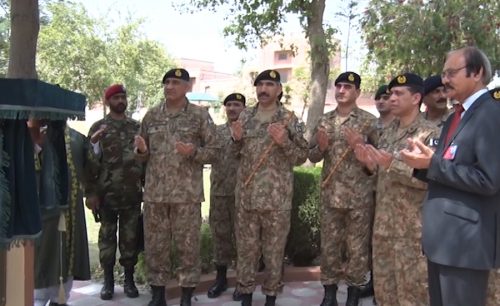 The institute will have first batch of 100 MBBS students this year while another 50 BDS students will be added next year onwards. The COAS said that the Army is significantly contributing to nation building and CIMS Bahawalpur is another addition in this regard.

The army chief also arrived at the house of martyred Major Mudassir.

Speaking on the occasion, he said that nation proud of being martyred can never be defeated. The family members of the martyred major said that they are proud of his martyrdom.

Major Mudassir was martyred while fighting with the terrorists in Orakzai Agency.