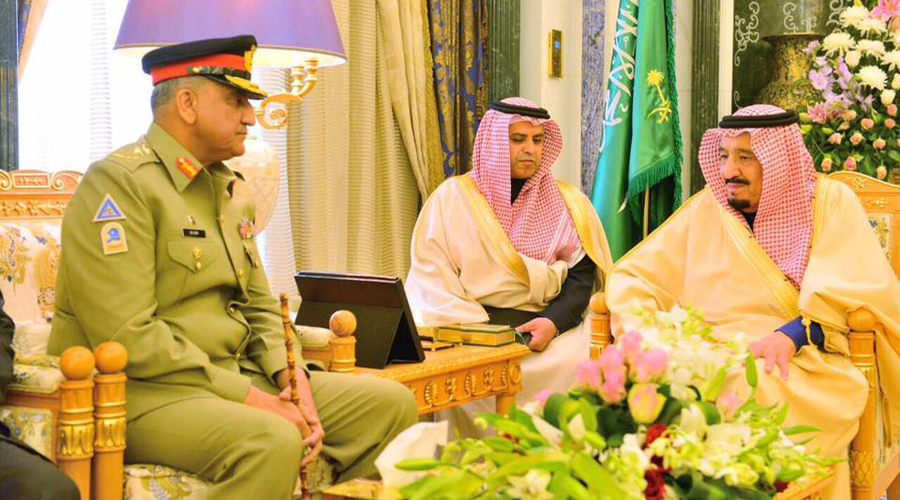 RIYADH (92 News) – Chief of Army staff (COAS) General Qamar Javed Bajwa, who is on an official visit to Saudi Arabia, called on Saudi King Salman bin Abdul Aziz Al Saud on Sunday. The Saudi king and the COAS agreed that both the countries share great history of cordial relations and deep spirit of brotherhood which has transformed into an enduring partnership. It was also acknowledged that both Pakistan and Kingdom of Saudi Arabia are vital players in regional stability, with significant responsibility towards the entire Muslim Ummah. Both the leaders reemphasized the need to continue working to eliminate the menace of terrorism and reinforce the mechanism to roll back extremism with even greater vigor. The crown prince and foreign minister were also present in the meeting. General Bajwa also held a meeting with deputy crown prince and Defense Minister Muhammad bin Salman to discuss matters related to mutual interests and bilateral security cooperation. The Saudi defense minister reassured the army chief that the kingdom supports peace and stability in Pakistan in every way. The COAS reiterated Pakistan's commitment to the security and protection of the Holy Mosques and also the territorial integrity of the kingdom. Later, General Bajwa met Chief of General Staff of Saudi Forces Gen Abdul Rehman bin Saleh Al Bunyan to discuss military to military relations, defense cooperation and regional security situation. Both leaders agreed to boost military coop and collaboration.