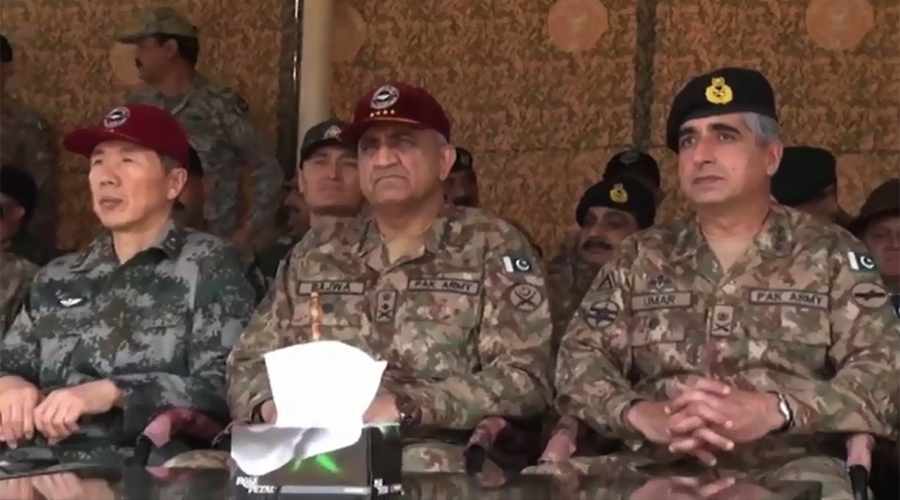 RAWALPINDI (92 News) – Chief of Army Staff (COAS) General Qamar Javed Bajwa visited National Counter Terrorism Training Centre (NCTC), Pabbi and spent his day witnessing concluding sessions of high-profile training events. He saw the final day of two-month Pak-China Exercise Warrior-4, which was focused on high impact counter terrorism operations both in rural and urban areas using heliborne and special forces of both countries. Speaking to officers and troops on the occasion, COAS noted that sharing of best experiences through series of exercises had improved counter terror combat skills of both Chinese and Pak troops. “Such exercises have integrated the two armies and will help us eliminate terrorism from the region. Our newly-built NCTC has been recognized as a world class facility and is attracting other armies for training with our Army.” Appreciating the interest of friendly countries in training with Pak Army, the COAS said: “We will continue to offer our training services for defeating the menace of terrorism and bringing peace.” He also commended the Training Centre staff for imparting training to Rangers, Police, ASF and other services fighting against terrorists. Later, the Chinese Military Commander paid his gratitude to Pak Army for the highest standard of training and skills, an asset that China shall continue to benefit. “Our successful training and closeness will help further consolidate long term trusted strategic friendship of our two eternally friendly countries,” said the Chinese commander. The COAS also witnessed the first ever Long Range Sniper Shooting Competition called The Striker’s Cup, in which 100 top civilian and military shooters from all over the country participated. The COAS awarded prizes to the best shooters. Major Junaid was declared the best shooter and won the Striker’s Cup. The COAS directed to expand the scope and participation of firers to train their youth to be able to win shooting competitions at international level. Earlier on his arrival, the COAS was received by Commander 1 Corps Lieutenant General Umar Farooq Durrani.